In this F-Phenibut review, we'll take an in-depth look at this popular nootropic. We'll also go over how F-Phenibut works in the brain, and provide information about the benefits, side effects, and where you can buy it online.

Looking for a more potent form of Phenibut?

This small change in structure results in increased potency and a faster onset of action. If you have tried Phenibut before and found it to be not strong enough, F-Phenibut could be a good option for you.

Let's examine the research and user experiences to see what F-Phenibut can do for our brains.

F-Phenibut is a more potent derivative of the popular nootropic Phenibut. It has been found to provide similar effects, including improved mood and reduced anxiety, but with a faster onset of action. F-Phenibut works by binding to GABA receptors in the brain, thus increasing levels of the neurotransmitter GABA.

F-Phenibut should be used with caution, as it can lead to tolerance and dependence if taken regularly for extended periods of time. It is important to start at a low dose and slowly increase it to avoid negative side effects. 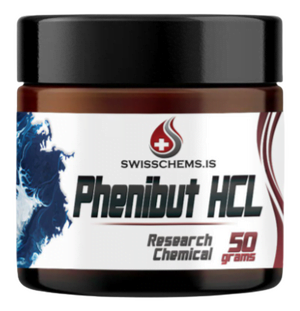 F-Phenibut is a smart drug that acts on the GABAB receptor but was never commercially marketed. It has therapeutic potential because it is selective for the GABAB receptor over the GABAA receptor. The drug's structure is similar to baclofen, which suggests that it may have similar effects.

F-Phenibut is a gabapentinoid, which is a derivative of the inhibitory neurotransmitter GABA (gamma-aminobutyric acid). It is frequently used for its anxiolytic and sedative effects.

The big difference between F-Phenibut and Phenibut is the additional fluorine-substituted phenyl ring in the β-position added to the molecule, which increases its potency and makes it easier to cross the blood-brain barrier (BBB).

The blood-brain barrier is a highly selective semipermeable border that separates circulating blood from the brain and central nervous system (CNS). It prevents harmful things in the bloodstream from entering and damaging the delicate tissues of the CNS.

This also prevents some nootropics from being able to pass through and reach the brain, where they can exert their effects. The addition of the fluorine atom on F-Phenibut makes it easier for the drug to pass through the BBB and enter the brain.

How Does F-Phenibut Work In The Brain?

F-Phenibut binds to the α2δ-1 site of voltage-gated calcium channels and the GABAB receptor, which explains its sedative and anxiolytic effects [1].

The α2δ-1 site of voltage-gated calcium channels work to regulate the flow of calcium ions into cells, and activation of these channels can have sedative effects [2]. It acts as a weak agonist at the GABAA receptor, but not enough to cause significant sedation or respiratory depression (which can happen with high doses of GABAA agonists like benzodiazepines).

Since F-Phenibut crosses the blood-brain barrier easily, it affects the brain directly, thus making it more potent and fast-acting than typical GABA supplements.

What Is F-Phenibut Used For?

F-Phenibut has not been studied in humans and therefore has no approved medical uses. However, it is commonly used off-label as a nootropic for its cognitive, anxiolytic, and mood-enhancing effects.

We do, however, have solid evidence for Phenibut's efficacy in treating anxiety and insomnia in clinical settings. One study found that Phenibut was effective in reducing anxiety in post-traumatic stress disorder patients [3]. Since F-Phenibut is a more potent form of Phenibut, it is likely to have similar effects.

What Are The Benefits Of F-Phenibut For Cognition?

The benefits of F-Phenibut for cognition include:

It is important to note that the cognitive effects of F-Phenibut vary from person to person, and some users may not experience any noticeable improvements in cognition.

Where To Buy F-Phenibut Online?

The best place to purchase F-Phenibut is from a reputable online vendor that offers third-party lab tests and high-quality products, such as SwissChems.

Although their F-Phenibut is currently out of stock, their Phenibut HCL is a good alternative. It is important to note that Phenibut HCL is not as potent as F-Phenibut, so a higher dose may be necessary to experience similar effects.

That being said, Phenibut HCL is still a very potent nootropic, and SwissChems offers high-quality products at affordable prices. You can buy 50 grams of Phenibut HCL for $24.99 right here:

Let's take a look at some of the user experiences shared on Reddit:

“I received 5 grams of this yesterday and my first impression is good…It took between 3 to 4 hours to feel the full effects. So far, I am a fan.. I will probably take it for several days in a row to see if my tolerance goes up or not… for science!”

“ I'd highly recommend this substance over regular Phenibut for it's quicker onset time and increased potency. I also like that it doesn't seem to have residual effects the next day because of its shorter duration. Overall a great substance…”

“F-Phenibut is pretty great. It's a little more intense than regular Phenibut, but not overwhelming. Great for social situations or just chilling out at home. The comedown isn't too bad either. Definitely recommend it to anyone looking for something stronger than regular Phenibut.”

Although each person's individual experience with F-Phenibut may vary, these Reddit users seem to have had positive experiences with the nootropic.

How Do You Take F-Phenibut For Cognitive Enhancement?

How you take F-Phenibut for cognitive enhancement can vary based on individual preferences and needs. It can be taken with or without food, at any time of day, but taken on an empty stomach is preferred by most biohackers.

Since F-Phenibut, and Phenibut, both have a high potential for tolerance and dependency, it is best to cycle its use. This means taking breaks from using the nootropic, such as a few days to a week, before resuming usage. Most people take F-Phenibut once or twice a week.

It is also important to start with a low dose and gradually increase it to find your personal sweet spot.

What Is The Recommended Dosage For F-Phenibut?

Biohackers take anywhere from 50 mg to 500 mg of F-Phenibut, with 200-300 mg being the sweet spot for most users. It is important to note that there are varying potencies of F-Phenibut, so it is best to carefully measure out your dose using a scale or milligram measuring spoon.

Most people experience diminishing returns at doses higher than 500 mg. This means that taking more than 500 mg may not provide any additional benefits and can increase the potential for negative side effects.

We recommend starting out with a low dose, such as 50 mg, and gradually increasing it until you reach your desired effects. Space out your dosage by at least 4-6 hours in order to gauge its effects and avoid tolerance build-up.

What Are The Side Effects Of F-Phenibut?

The exact toxic dosage is unknown since there is very little history of human usage to study. However, early reports stated that higher doses may have adverse effects that can lead to serious injury or even death.

Evidence from people who have tried it in moderate doses and used it occasionally suggests that there seem to be no negative side effects, but those who are not used to it may experience the following:

It is important to use caution and start with a low dose in order to avoid any potential negative side effects. It is also recommended to cycle its usage, taking breaks from using F-Phenibut periodically. And as always, consult with your doctor before starting any new supplement.

What Nootropics Are Similar To F-Phenibut?

If you're looking for a similar nootropic, Phenibut, L-Theanine, and Picamilon are great alternatives.

Overall, each of these alternatives has its own unique properties. If you're brand new to the World of nootropics, we recommend starting with a natural and well-researched option like L-Theanine before graduating to something stronger like F-Phenibut.

What Brain Supplements Can F-Phenibut Be Stacked With?

Stacking F-Phenibut with a choline source, such as Alpha GPC or Citicoline, can enhance its effects and prevent any potential headaches. Another popular stack combines F-Phenibut with racetams, like Piracetam or Aniracetam, to enhance their cognitive-enhancing properties.

For a comprehensive brain supplement with 13 natural nootropic ingredients that work synergistically, we recommend trying NooCube. In addition to choline, it also includes L-Theanine and Bacopa Monnieri, both known for their calming and cognitive-enhancing effects.

Plus, it's made in a cGMP-certified facility and third-party tested for purity and potency. You can get your hands on NooCube right here:

How Long Does It Take For F-Phenibut To Work?

According to Reddit, people have reported that F-Phenibut begins working after only 10 minutes, although effects may last up to 8 hours. However, metabolism and dosage can play a role in how long it takes for the drug to start working.

How Does F-Phenibut Make You Feel?

F-Phenibut makes you feel relaxed, calm, and euphoric. It also can enhance cognitive function and improve mood. It will make you feel more social and talkative in higher doses.

What's The Half-Life Of F-Phenibut?

There is no official consensus on the half-life of F-Phenibut, but it has been estimated to be around 5.3 hours, with effects lasting up to 24 hours.

Is It Safe To Use F-Phenibut?

F-Phenibut can be addictive and can lead to tolerance and dependence. It is important to use it with caution and follow dosage guidelines. Do not mix with alcohol or other drugs, as this can be dangerous. When used responsibly, F-Phenibut is generally considered safe.

So what do we know about F-Phenibut?

It's a potent nootropic with anxiolytic and cognitive-enhancing effects. It works by stimulating the GABA receptors and can have euphoric effects in higher doses.

It is important to use caution when taking this supplement, starting with a low dose and cycling usage to prevent dependence or withdrawal symptoms. It can be stacked with a choline source and racetams for enhanced effects.

F-Phenibut has many benefits when used responsibly, but it is important to research and understand the potential risks before trying it.