Mildronate was found in 17 % of Russian athletes in 2015, compared to 2.2 % of athletes from other countries.

Do you want to know why? Let's find out in this Mildronate review.

What is Meldonium (Mildronate)?

Professor Kalvins, the inventor of Mildronate (also known as Meldonium), researched all body compounds depleted during endurance training in 1975. He discovered that a specific molecule, Gamma Butyrobetaine, gets consumed due to physical exertion.

He replaced one atom of Silicon with one of Nitrogen in this molecule so that it would not break down and might operate as a transmitter from the CNS to peripheral cells.

Mildronate became available to the general population in 1984. As a result, it's commonly used to treat angina, cardiac failure, and lessen the symptoms of alcohol withdrawal.

Mildronate became well-known after Maria Sharapova, a famous tennis star, said that she took medication for the past ten years for health concerns.

Mildronate is sold in Latvia for roughly 70 million euros per year or about 0.7 percent of the country's overall exports.

Professor Ivars Kalvins, the drug's originator, argues that Meldonium or Mildronate has never been shown to have anabolic characteristics. Instead, a cardioprotector can protect athletes' circulatory systems from ischemia during high-intensity exercise. He further claims that as a result, most athletes should utilize it to reduce the detrimental consequences of high-intensity exercise.

Properties and Pharmacology: How Does Mildronate Work?

Mildronate is a fatty acid oxidation inhibitor that is now primarily used to treat cardiac problems like angina, heart attacks, and heart failure. The drug works by changing the routes for carnitine, a chemical that plays a role in fat metabolism.

The supplement, in combination with an angiotensin-converting enzyme inhibitor, called lisinopril, enhanced activity performance and peripheral circulation in people with chronic heart failure, according to 2005 research.

Its mechanisms inhibit carnitine palmitoyltransferase-1 (CPT-1), an enzyme that regulates the metabolism of fatty acids. The presence of this enzyme plays an essential role in the oxidation of fatty acids in the mitochondria.

Inhibition of CPT-1 results in an increase in the concentration of free fatty acids in the mitochondria, which in turn activates the peroxisome proliferator-activated receptors (PPARs) and stimulates the expression of genes responsible for the oxidation of fatty acids.

What is Meldonium (Mildronate) Used For?

Mildronate is used to prevent angina onset and improve blood circulation in the muscles. It is indicated to treat diseases such as angina pectoris, heart attack, heart failure, hypertension, and others.

Mildronate has the ability to prevent the accumulation of harmful intermediate products of fatty acid beta-oxidation in ischemic tissues and impede this extremely oxygen-consuming process by inhibiting carnitine production. Mildronate is effective in treating cardiac ischemia and related complications.

To sum up, here are the benefits of Mildronate to keep you guided. 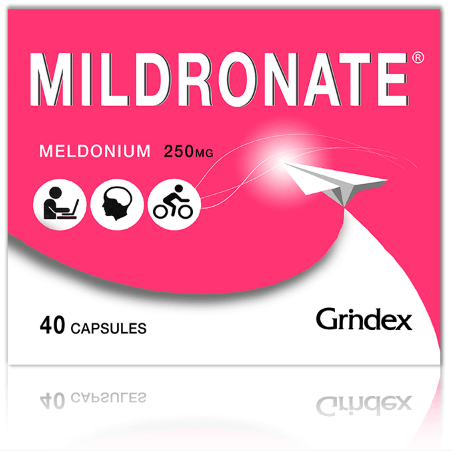 Mildronate may be banned in sports, but let's see how it affects the different classes of users.

"I've taken two 250mg capsules on two consecutive days and felt a boost to energy, alertness, and drive. Honestly, the effects after a 250mg dose lead me to be curious and a bit nervous about doubling it with 500mg...I experienced hypotension and possibly an irregular heartbeat when I experimented with Modafinil, so I had some concerns in trying Mildronate, but thankfully experienced no similar issue."

"I see that you love l-carnitine and alcar. Strangely, no one tries the meldonium (mildronate, metamax), which works better, but the goal is one. It's in my top 5 (semax, piracetam, nicotine patches, caffeine/l-theanine, meldonium). It really works, even all Russian athletes used it."

"No improvement in stamina but no soreness, which she'd usually feel after two or three matches in a row. Less shoulder stiffness and almost no back pain."

Where to Buy Mildronate?

The good thing about buying supplements these days is that you have the option to buy them online and deliver them to your doorstep. Fortunately, you can buy Mildronate from several online vendors like Cosmic Nootropic and shopping sites like Amazon.

There is just an important reminder when buying online. Make sure that you know the background of the online pharmacy and that it only sells genuine supplements. Legitimate vendors offer money-back guarantees, and their customer service is available 24/7. If the vendor you opt to buy Mildronate from has these, that is sure one less worry to tick off your list.

You should take 250 mg of Mildronate 2–4 times each day to increase your mental and physical strain tolerance. This mode of consumption should last anywhere from 14 to 21 days.

Mildronate GX, which contains the active ingredient Meldonium, is available in capsule form with a therapeutic dose of 500 mg orally twice a day and is used to treat cardiac and neurological problems such as ischemia. The highest daily dose for this modulation administered in humans is 2000 mg in oral form.

How to Take Mildronate for Sports Events?

Mildronate dosage in sports is highly crucial for all athletes. If you participate in sports or have a high level of physical exertion, the daily dose should be 15-20 mg per 1 kg of body weight.

Mildronate should be taken once a day in sports, 30 minutes before training. The administration process typically takes between 6 and 3 months. The body then becomes accustomed to the medicine, necessitating a four-week cycle.

Mildronate is available in the form of tablets (capsules) or injections. If you choose pills, the maximum daily dose is 2 grams (2000 mg). It's worth noting that injections are two times more effective than pills. Mildronate can be taken in conjunction with L-Carnitine or Riboxin.

After taking Mildronate, many people felt a change in their perception. They experience nausea, a metallic taste, headaches, and shakiness. Anxiety, dizziness, fainting, stomach problems, and muscle spasms are possible side effects.

There are no notable contraindications to using this product, but high blood pressure, agitation, and allergic reactions have been recorded as side effects.

Cases of overdose have not been reported, but still, it is better to stick to the recommended dosage to avoid any adverse side effects.

Is Mildronate Allowed by the World Anti-Doping Agency?

Meldonium is inexpensive and readily accessible in Russia and some Eastern European countries. It is sold under the brand name Mildronate by the Latvian pharmaceutical company Grindeks. In the United States, the Food and Drug Administration (FDA) has not granted it a license.

Why Do Athletes Use Mildronate for Endurance Management?

Athletes commonly use Mildronate to speed up recovery or improve exercise performance. The value of Meldonium in improving athletic performance is highly theoretical and is debated without solid scientific data.

How Long Does Mildronate Stay in Your System?

For three weeks, 32 volunteers were evenly divided into two groups. Each was given either 1.0 g or 2.0 g of oral Mildronate daily. The study discovered that Mildronate takes several days to reach a steady-state in the blood and has a long elimination time after treatment is stopped.

Mildronate is a popular supplement that many athletes have used to improve their performance and recovery. Although the FDA disapproves of Mildronate, it is readily available over-the-counter in some countries.

It has been shown to improve exercise performance, and many athletes use it to help improve their recovery time. Mildronate is safe in most cases, but it can have adverse side effects.

Mildronate has many benefits for athletes, but more research is needed to establish its long-term effects.