9-Me-BC saves you from when you feel like your brain is acting slow in school or work.

Have you ever experienced having a mental block during your major exams?

Or even times when it seemed like you couldn't process any information?

Then worry no more.

9-Me-BC is a nootropic drug backed up by research studies as a cognitive enhancer.

Let's find out more in this 9-Me-BC review.

Table of Contents show
What is 9-Me-BC?
What Does It Do?
Effects and Benefits
How Does It Work?
Dosage & How to Take 9-Me-BC Powder and Capsules
Side Effects
Possible DNA Damage
Possible Dopamine Neurotoxicity
Experiences & 9-Me-BC Reviews Shared on Reddit
Where to Buy 9-Me-BC?
Frequently Asked Questions (FAQ)
Is 9-Me-BC Safe?
How Long Does 9-Me-BC Last?
Conclusion

9 Me BC is a methylated derivative of β carboline with the molecular formula C12H10N2 [R]. The MBC stands for Methylβ carboline.

Beta-Carbolines (BCs) are derived from tryptophan and its derivatives forming endogenously in mammals and humans. These properties are present in the human brain, cerebrospinal fluid, and plasma.

In a 2008 study of the 9-methyl-β-carboline (9 Me BC), it was identified for the first time that this compound is exerting a neuroprotective effect [R]. The Caspase-3 activity (which plays a crucial role in programmed cell death) was decreased, while the ATP content was increased.

Furthermore, there was a significant increase in the differentiated dopaminergic neurons [R], which subsequently increased the dopamine content and uptake [R]. The inflammation-related genes were also reduced.

What Does It Do?

9-methyl-beta-carboline or 9MeBC powder is one of the nootropic stimulants for cognitive functioning.

The chemical structure of 9 Me BC consists of a benzene ring substituted with a piperidine group and an additional methyl group attached to carbon #8.

In the case of 9-Me-BC, the central nitrogen atom of the piperidine group is replaced with a carbon atom. This change in the molecular structure allows the drug to have the ability to enhance memory and cognition.

In the brain, 5-HT1A receptors are located on neurons responsible for transmitting information to other neurons.

When these receptors receive signals from other cells, they cause the regeneration and protection of neurones. When neurons fire, they send signals to other neurons in the brain, causing them to fire too.

Some studies and experiments on laboratory animals have shown that carboline 9 may improve dopamine levels uptake [R], a neurotransmitter associated with pleasure, motivation, mood, memory, and attention. This is through inducing the growth of the hippocampal dopaminergic neurons [R] for memory persistence.

It offers protective effects on dendrites and synapses through up-modulation and differentiation.

In addition to its cognitive enhancement as a dopamine enhancer, 9MeBC also has anti-inflammatory effects by decreasing the inflammatory cytokines. It also inhibits the proliferation of microglia induced by toxin treatment that disrupts cognitive function.

The 9-methyl-β-carboline powder has a wide range of effects on the human body's functioning. It is a well-rounded nootropic drug that lasts longer than the long list of cognitive enhancers.

Some of the benefits of using 9 Me BC are:

How Does It Work?

The 9MeBC powder works wonders for induced cognitive functioning. As shown in rodent studies, it delivers sharper and faster thinking with clean stimulation.

With 9-MBC, the rate of neurotrophin synthesis increases due to enhancing hippocampal dopamine levels.

This action is associated with dendritic, synaptic proliferation, and increased ATP synthesis.

The nootropic powder 9 Me BC regulates, differentiates and protects dopaminergic neurons, dendrites, and synapses in the substantia nigra, and in the hippocampus. 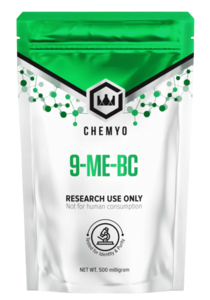 Dosage & How to Take 9-Me-BC Powder and Capsules

There is no recommended dosage for taking the capsule and powder as studies are still limited. However, some companies presented directions on drug administration.

You should take 1 capsule of 9-methyl-β or 9MeBC powder daily, preferable during the mornings.

This is ideal for students, workers, and even athletes aged 18 and above.

Here are the known side effects of the product based on clinical trials and consumer experiences.

DNA damage after UVA rays exposure is possible due to photosensitivity. To avoid this, it is advised to keep away from direct sun when under the influence of carboline 9.

If a quantity has exceeded the maximum recommended dosages of the 9MeBC, dopamine neurotoxicity may happen.

Here are some consumer reviews we can use for reference on its effects.

"Definitely feel more focus and concentration. It feels like my brain is performing at near-peak performance. There's not a high or euphoria (maybe 40%), but there's a definite impact on cognition and mental sharpness. Excellent stuff, and I like it much more than amphetamines. No highs, no lows. Just clear results on myself."

"It has provided me with a significant boost in motivation. I am a lot more interested in my work and life in general…However, I have not been able to experience an increase in cognition, which is described in the literature. I might be able to remember stuff slightly easier, but it is just really hard to quantify."

The 9 Me BC powder is available in different online stores. You can order it and other vitamins for cognitive enhancement from trusted websites.

However, in some stores, the powder and capsule products are not sold as dietary supplements but rather pure chemical substances for research purposes.

Here are the answers to common questions:

9 methyl beta is a novel compound, so caution is advised to consumers as there is still a lack of human trials to determine its safety and potency. Further investigations about the powder are underway.

How Long Does 9-Me-BC Last?

In the rodent study, the effects of 9 Me BC powder in vivo were tested through their performance in spatial learning tasks and radial arm maze.

Remarkably, the treatment significantly improved their performance after 10 days, with an increased level of dopamine and enhanced dendritic formation.

No specific recommendation has been released for human administration regarding the duration of the product's effects.

After several studies on the effectiveness of the 9 methyl beta-carboline or 9 Me BC powder, there is no doubt that it can be a potential candidate for cognitive enhancers and treatment for progressive nervous system disorders like Parkinson's disease.

Others even consider it as nootropics for ADHD.

However, since research is currently limited to animal studies, there is still no guarantee that the same effect rendered on the trials will be the same for humans.

The FDA has not evaluated statements regarding 9Me BC as dietary supplements, and therefore, the product is not intended to diagnose, treat, cure, or prevent any health condition.

Please consult a qualified professional to determine the proper treatment to be safe.