In this Alpha-GPC review, we look at how it works and explore the many health benefits and uses before recommending dosages and listing potential side effects.

Do you want to improve your cognitive function without having to rely on harmful chemicals?

Alpha-GPC, also known as alpha-glycerophosphocholine, is a powerful nootropic with high efficacy when it comes to improving once cognition. It's been shown to improve memory, focus, and attention span, as well as increase mental energy.

If you're looking for a safe and effective way to boost your cognitive performance, then Alpha-GPC may be the perfect nootropic for you.

Let's take a closer look at how Alpha-GPC can benefit your cognitive function and overall brain health.

Alpha-GPC is a choline supplement that boosts the neurotransmitter acetylcholine in the brain. This neurotransmitter is responsible for memory and learning. The evidence shows Alpha-GPC's effectiveness in improving memory recall in healthy adults. Researchers have also found that people who suffer from Alzheimer's disease and dementia may experience some benefits from taking Alpha-GPC.

It's generally well-tolerated, but some people may experience side effects like headaches, dizziness, and gastrointestinal distress. 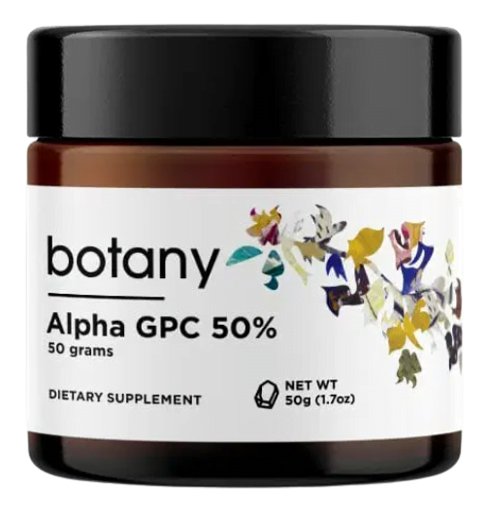 Alpha-GPC, also known as choline alfoscerate and L-Alpha glycerylphosphorylcholine, is a natural choline compound found in the brain. Choline is an essential nutrient for brain health, and it's involved in a number of cognitive processes like memory formation and neural signaling.

Alpha-GPC is a biosynthetic precursor of acetylcholine (ACh) and one of the most bioavailable forms of choline. This means that it's easily absorbed by the brain and can cross the blood-brain barrier (BBB) to deliver its benefits, such as reducing neuronal cell death [1].

Alpha-GPC has been shown to improve cognitive function in healthy adults, and it's also used to treat Alzheimer's disease and dementia. It's thought to work by increasing levels of acetylcholine in the brain, which is a neurotransmitter involved in memory formation and learning [2].

Alpha-GPC is a non-essential nutrient, which means that your body can produce it on its own. However, levels of Alpha-GPC tend to decline with age, which is why many people take it as a supplement.

It's a non-prescription supplement that's widely available online and in stores. You can also find it in some energy drinks and pre-workout supplements, making it perfect for people who want a little extra boost of energy and focus.

How Does Alpha-GPC Work In The Brain?

Alpha-GPC works by increasing levels of acetylcholine (ACh) in the brain. Acetylcholine is a neurotransmitter involved in memory formation and learning and is also necessary for muscle contraction.

As we age, our bodies produce less and less acetylcholine. This can lead to memory problems and mild cognitive impairment [3].

Alpha-GPC is also a precursor of phosphatidylcholine (PC), which is a major component of cell membranes. PC is essential for maintaining healthy cell membranes and keeping them flexible. It's also involved in the production of the myelin sheath [5], which is a fatty layer that surrounds and protects nerves.

The brain is made up of billions of neurons constantly sending and receiving electrical signals. These signals need to be fast and efficient in order for our brains to function properly. The myelin sheath acts as an insulator, which helps to protect the nerve fibers and ensure that the electrical signals can travel quickly and efficiently.

This is where Phosphatidylcholine (PC) enters the picture. PC is essential for the maintenance of healthy cell membranes, and it's also involved in the production of the myelin sheath.

It's converted to α-GPC through two different pathways:

The Kennedy Pathway is the chained-together reactions that make up one of our most important mechanisms for regulating cell growth. This includes converting free choline into cytidine diphosphate (CDP), which then gets condensed with diacylglycerol to form PC.

The methylation pathway converts PC, which is made up of phosphatidylethanolamine and choline, into an important source for constructing your brain's myelin insulation. PC can then be converted to 1-acyl-GPC and eventually α-GPC through the action of Phospholipase D. α-GPC is then transported across the blood-brain barrier, where it increases levels of acetylcholine in the brain [6].

What Is Alpha-GPC Used For?

Alpha-GPC is used for a variety of purposes, including:

In clinical settings, Alpha-GPC has been shown to be effective in improving cognitive function and memory, as well as treating Alzheimer's disease and dementia [8].

Off-label, Alpha-GPC is commonly used by people looking to improve their cognitive function and memory, as well as increase growth hormone production [9] which makes it popular among bodybuilders and athletes.

What Are The Benefits Of Alpha-GPC For Cognition?

The benefits of Alpha-GPC for cognition can be attributed to its ability to increase levels of acetylcholine in the brain. Here's a list of the benefits that have been observed in clinical studies:

These benefits are thought to be due to the fact that acetylcholine is involved in many of the brain's cognitive processes, including memory formation, attention, and information processing.

Where To Buy Alpha-GPC Online?

If you're looking to buy Alpha-GPC online, there are a few things you should keep in mind. First, make sure you're buying from a reputable source. There are a lot of scams out there, and you don't want to end up with a product that doesn't live up to its claims.

Second, make sure the product you're buying is pure Alpha-GPC. There are a lot of products out there that are cut with other compounds, and you want to ensure you're getting what you're paying for.

Finally, make sure you're buying from a source that offers third-party testing. This ensures that the product is pure and has the correct dosage.

We recommend buying Alpha-GPC from a reputable vendor like Pure Nootropics. They offer third-party testing, and you can be sure you're getting a high-quality product.

Let's take a look at what people are saying about Alpha-GPC on Reddit:

According to ‘cfjones3’: (he notes how powerful the supplement is but warns users not to take it too late in the day because of this)

"WOW! OMG! This stuff is amazing! I thought it was simply a "Go-along" to support the benefits of the racetam I'm already taking (phenylpiracetam). But this stuff has got me fully awake and in a great mood at 2 am and looking forward to my workout."

“I've been taking Alpha GPC for a few months now, and I can definitely say it's helped my cognitive function. I'm able to think more clearly, and my memory has improved. Overall, I'm very happy with the results.” - nootl0v3r

“I started taking Alpha GPC a few weeks ago, and I'm really impressed with the results. I've noticed an increase in my mental clarity, and my memory has improved. I would definitely recommend this product to anyone looking for a cognitive boost.” - daydreamr8

As you can see, people are generally very happy with the results they've seen from taking Alpha-GPC. It may be worth considering if you're looking for a cognitive boost.

How Do You Take Alpha-GPC For Cognitive Enhancement?

The way you take Alpha-GPC for cognitive enhancement will depend on your goals. That being said, people who take Alpha-GPC on an empty stomach tend to experience the best results. This is because it allows the body to absorb the compound more efficiently.

Finally, we recommend taking Alpha-GPC for at least two weeks to see the full benefits. After that, you can consider cycling off of it for a week or two to avoid any tolerance build-up.

What Is The Recommended Dosage For Alpha-GPC?

You might also want to start with a lower dose of the supplement to analyze the behavior of the effects on your body. Alpha GPC can be effective for some users at a dose of 200 to 250 mg.

As Alpha-GPC is one of the most potent sources of choline available in a supplement (approximately 40% potency), you don’t need a big dose as you might with other nootropics.

If you have a cognitive disorder and are using the supplement to help improve the deterioration associated with this disease, a higher dose is recommended. The dosage recommendation, in this case, would be no more than 1200 mg daily, divided into two 600mg doses or three 400mg doses taken in the morning, at lunch, and in the evening.

What Are The Side Effects Of Alpha-GPC?

When it comes to supplementation and administration of Alpha GPC, there are potential side effects that users should be aware of.

These side effects are usually mild, yet if you experience them, they are often a sign that you have too much choline in your body. If this is the case, you should decrease the dosage.

Users who suffer from hypertension, or a similar diagnosis, should also consult their doctor before taking Alpha GPC, and if you are taking scopolamine to help with motion sickness, nausea after surgery, or managing IBS symptoms, you should consult your doctor too.

It’s not safe for children or pregnant women to consume, and this is because of the lack of safety data surrounding the supplement.

What Nootropics Are Similar To Alpha-GPC?

If you're looking for a similar nootropic to Alpha-GPC, we recommend trying other cholinergic compounds like CDP-Choline and Choline Bitartrate. These compounds work in similar ways to Alpha-GPC, but they're not quite as potent. That being said, they're often more affordable and easier to find.

What Brain Supplements Can Alpha-GPC Be Stacked With?

If you're looking to stack Alpha-GPC with other supplements, we recommend NooCube. NooCube is our top-rated cognitive enhancer, and it contains a range of powerful nootropics that work together to enhance cognitive function.

One of the key ingredients in Noocube is Alpha-GPC. As we mentioned, Alpha GPC is a potent source of choline, and it's been shown to boost cognitive function. In addition, NooCube also contains other nootropics like Huperzine A, Bacopa Monnieri, and L-Theanine, which all have synergistic effects.

So if you're looking for a powerful brain supplement that you can stack with Alpha-GPC, we recommend NooCube. You can buy NooCube online right here:

How Long Does It Take For Alpha-GPC To Work?

How Does Alpha-GPC Make You Feel?

What's The Half-Life Of Alpha-GPC?

Alpha-GPC's half-life is 4-6 hours. This means that it will stay in your system for around 12 hours after supplementation. To get a steady plasma level of choline, it's best to take 2-3 doses per day.

Is It Safe To Use Alpha-GPC?

Alpha-GPC is considered GRAS (Generally Recognized As Safe) by the FDA. It only has a few mild side effects. The most common side effect is headaches, which is often a sign of too much choline in the system.

How Much Choline Does Alpha-GPC Give You?

Alpha-GPC is around 40% choline by weight. This means that 1000 mg of Alpha-GPC provides about 400 mg of choline.

Can You Take Alpha-GPC Every Day?

Alpha-GPC can be effective and safe for daily use. However, if experience tolerance or side effects, it's best to take a break for a few days.

Alpha-GPC is legal in the United States and most other countries. However, it is banned by some athletic organizations. Before supplementing with Alpha-GPC, check with your organization to see if it's allowed.

Is Alpha-GPC A Prescription Drug?

Alpha-GPC is an effective nootropic supplement that can enhance cognitive function. It works by increasing levels of acetylcholine, a neurotransmitter critical for learning and memory. Alpha-GPC is also effective at boosting physical performance.

While Alpha-GPC is generally safe, it can cause some side effects like headaches. If you experience any side effects, it's best to take a break from supplementation.

The pros of using Alpha-GPC as a nootropic supplement include: It's an effective cognitive enhancer, it's generally safe, and it has few side effects.