Nefiracetam is popular among young adults who wanted to excel in their studies.

Why is this so?

Hands down to its potency as the better nootropic for cognition, learning, and memory.

There are many smart drugs in the market, but Nefiracetam has benefits that are unique to it at a competitive price.

If you want to know why it is the latest rave in the nootropic industry, read this review.

Table of Contents show
What is Nefiracetam?
Effects & Benefits
Dosage and How to Take Nefiracetam
Side Effects
Experiences Shared on Reddit
Stacks
Where to Buy Nefiracetam Powder?
Frequently Asked Questions (FAQ)
Is It Safe?
Nefiracetam vs. Piracetam
Nefiracetam vs. Aniracetam
Conclusion

Daiichi Pharmaceutical in Tokyo developed Nefiracetam [R] in the 1990s.

This most recent synthetic compound was designed to provide anti-anxiety effects aside from being better known as a cognitive enhancer.

It is fat-soluble and was created as a treatment for patients with cerebrovascular disorders.

The phase II clinical trials were conducted in the USA in 1999. It was then that the drug was used as a medication for cognitive disorders caused by stroke, abulia, and dementia.

As part of the racetam family, it contains a pyrrolidone nucleus at its core. Its chemical structure is similar to Aniracetam.

However, it is more often compared to Piracetam with a phenyl group and two methyl groups added to the amine.

Nefiracetam is categorized as a cholinergic compound. Meaning, it mimics the action of acetylcholine, therefore affecting the acetylcholine levels in the brain.

Currently, it is sold as a prescription drug in Japan and as a supplement in the United States.

Although it's a new racetam nootropic in the community, it has a list of benefits that dare compete with even older and more established nootropics.

Nefiracetam alleviates stress and enhances cognition through its various actions connected to the brain.

This is how it works. 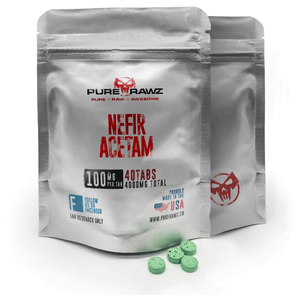 Dosage and How to Take Nefiracetam

There is no perfect dose established yet. However, most users frequently take 150 mg to 450 mg throughout the day.

It is best to take the drug in three even doses to better assess the right dosage for every person.

There are reports that effects start to exhibit within 30 to 60 minutes after oral administration.

Dosage is easily measured since it comes in 400 mg to 600 mg tablet and capsule forms. Some vendors also have the powder form. You may boost your dosage to 1,200 mg per day.

When taking the drug make sure that you have eaten a meal with healthy fats. Another option is to take it with a tablespoonful of olive or coconut oil.

The common report is that effects may take place after 7 straight days of taking Nefiracetam.

Nefiracetam has similar adverse effects as other racetams. In most cases, these are experienced in high doses of pure nootropics.

Some of these side effects are:

Of these, headaches are the most common. This happens when you take it without a choline supplement.

Based on clinical research on animals, there are no toxic effects with prolonged use at the recommended dose.

Further, based on research, it may increase the central nervous system depressant activities of some drugs like Aclidinium.

With its growing popularity, many users have shared their experiences about the supplement.

Let’s read how it exhibited its famous function as a nootropic.

“This is a personal favorite of mine. When using amphetamine and losing some sleep I tend to get a bit out there. With nefir I become clear headed and fully capable. I suspect nefir would be good for schizophrenia and other related mental ills. nefir also adds to verbal fluency for me.”

“Normally when I'm studying, I would have to go back and review multiple times to be able to fully memorize the material, but with nefiracetam, it's just so easy to get the information in my memory and to be able to recall it with no effort. I find it to be non-stimulatory, and it has subtle effect in terms mind clarity and focus, but if you pair it with studying, it makes it so easy to grasp all the concepts and materials with less effort.”

If you want to learn more about what others have experienced, make a diligent research about Nefiracetam user experiences.

Nootropics from the racetam family often give headaches. The reason could be the decrease in choline levels in the brain caused by the nootropic.

It has been advised to take stacks to maintain sufficient levels of choline and avoid headaches.

The most common stacks for Nefiracetam are Alpha GPC or CPD-Choline. These choline supplements provide optimum acetylcholine in the brain avoiding burnouts and headaches.

Where to Buy Nefiracetam Powder?

If you want to get your hands on the millennial smart drug Nefiracetam buy its powder, capsule, or tablet forms from trusted vendors.

They have been providing legitimate supplements of the highest quality and have always strived for excellence to serve their customers better.

Even with a lack of human clinical trials, people still get curious about the basic function of and side effects of Nefiracetam.

Let’s answer some of the common questions here.

Like any other racetams, this supplement is one of the bionootropics with no known toxicity even with higher doses.

It is well-tolerated and safe to use.

If you are experiencing any adverse effect or if you are taking other supplements along this one, it is best to get medical advice.

Nefiracetam is a derivative of Piracetam. Having similar pharmacological structure, both of them have neuroprotective features. It aids in improved cognitive function and prevents brain damage.

It's fat-soluble while Piracetam is water-soluble making it easier for the former to modulate excitatory and inhibitory synaptic transmission.

These are the other benefits that are not shared with Piracetam.

The mentioned memory enhancing benefits of Nefiracetam, it is considered as a more potent nootropic than Piracetam.

While Nefiracetam is a derivative of Piracetam, it is known to be more potent than the latter.

Structurally, Nefiracetam and Aniracetam are said to have a closer similarity. Both belong to the racetam family and are fat-soluble.

Fat-soluble molecules are more potent compared to water-soluble ones. It works best in balancing brain chemicals for enhanced cognitive function.

Some users who have tried both supplements prefer Nefiracetam. Although they do not feel an immediate response, they say once the effects kick in, it lasts longer and they feel better.

It's not a quick remedy for memory loss. Research shows that it has to be taken at least 7 days to experience any difference in cognition.

Other users claim that they feel more focused after a few hours of taking the drug.

The result varies for each individual but the sure thing is, it works wonders in the brain compared to Aniracetam.

Nefiracetam may be part of the racetam family but it has more benefits compared to the other racetams.

It has better brain-enhancing abilities that target the potentiation of GABA, glutamate, and acetylcholine. All focused on the formation of long-term memory.

More research is required to establish its efficacy but while it is available in the market, people, especially students and young professionals are the frequent users of the supplement.

The neuro hackers use it to enhance memory, focus, and learning abilities. The supplement’s initial design as an anti-memory loss is being replaced by its other highly sought-after benefits.

Since it is relatively new, a line up of research is still in tow to get the latest of its potential benefits.