Go out of the confines of your bedroom and enjoy life with other people. You can fight social anxiety disorder with Stresam.

Many supplements are swarming the market, claiming to relieve anxiety disorders. Instead of trying all of them, you have to do in-depth research by reading information about the product or reading reviews, just like this Stresam review.

If you want to know more about Stresam, read on.

Stresam is a non-benzodiazepine anxiolytic (anti-anxiety) and anticonvulsant drug created for the treatment course of anxiety disorders in France, Malta, Bulgaria, and Romania. Etifoxine is the active ingredient in the medication.

It is a benzoxazine derivative with a unique mode of action that sets it apart from other anxiolytics. In terms of the influence on the development of the anxiety symptom complex, it is characterized by maximum selectivity and physiological action.

Biocodex, a French pharmaceutical firm, produces Stresam. When benzodiazepines (psychoactive chemicals with sedative effects) dominated the market for sedatives and medications for anxiety disorders in the 1960s, the active substance was produced by a German pharmaceutical company.

Despite their widespread use, benzodiazepine tranquilizers have several adverse side effects, including psychomotor inhibition, sleepiness, lethargy, dizziness, muscle relaxation, cognitive impairment, addiction, and so on.

How Does Stresam Drug Work in the Body?

Although the mechanisms of etifoxine's action are unknown, it is known to bind to the same target binding sites (neurotransmitter 1 receptors) on nerve cells as GABA (gamma-aminobutyric acid). GABA is a neurotransmitter (a substance that communicates between nerve cells) that inhibits specific brain processes.

Etifoxine both directly and indirectly replicates the impact of GABA, resulting in a calming effect in the amygdala that aids in the regulation of anxiety symptoms.

It is a specific antagonist of the GABAA receptor, a protein found in the membrane of cells. The receptor is part of a complex that helps the potentiation of nerve signals and is essential for regulating brain function.

The etifoxine-GABA complex binds to the receptor, which results in the inhibition of nerve signals and the calming of anxiety. Its efficacy for healing anxiety and as an antidepressant made it a reputable medicine by some doctors.

Benefits and Actions of Stresam Treatment

Patients with muscle pain, headaches, or functional gastrointestinal issues are 2.5-10 times more likely to have a positive match for a pain condition, generalized anxiety disorder, or major depressive illness in a primary care context.

While there are other types of medications available, Stressam as an anti-depressant offers the following benefits:

Etifoxine is effective in reducing the symptoms of anxiety and stress, but it also improves the overall quality of life. 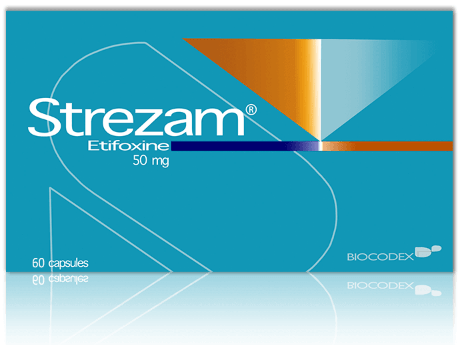 It is an essential part of a comprehensive treatment plan that includes other therapies, lifestyle, and behavioral modifications.

Stress-related disorders are prevalent, affecting an estimated 30% of the general population at some point in their lives. But still, many people have shared their experiences in using tranquilizers such as Stresam. Here are some of them.

"I had mixed results. Like it was mentally stimulating but physically relaxing, which was an interesting, unique little effect I got from it. I wouldn't say it was specifically beneficial or that I would try it again, but at the same time, it wasn't an unpleasant experience."

"Etifoxine is a decent anxiolytic if your GABA receptor isn't already down-regulated, time. At 50-100 mg, it produces anxiolytic effects similar to benzo like diclazepam, but without the typical side effects of diazepines, such as memory and muscle control loss, as well as psychological dependence. I haven't used it that often but when I do, there's still some very slight sedation that accompanies the anxiety relief, but it seems to go away once it reaches its peak effects."

"Tried etifoxine, wasn't super impressed. I think if these novel Russian drugs were as good as they're touted, then they'd be a lot more popular. I'd personally look into gabapentin if I were you instead if you're looking for a non-benzo GABA drug."

If you are one of those worrying about alleviating your anxiety and tension, you can try using Stresam.

Stresam is often available with a doctor's prescription. However, in some countries, you can buy it over-the-counter. You can also try buying from reputable websites such as Cosmic Nootropic. Aside from Stresam, it also has a line of other nootropic supplements that you can buy in retail or bulk.

Stream's tablet capsule form is priced at $51.50 in 60 capsule bottles plus the shipping fee.

In general, the etifoxine anxiolytic Stresam can be said to help treat a wide range of anxiety-neurotic diseases and psychosomatic pathologies, including sleep problems, vegetative-vascular dystonia, and so on.

The usual dose is 1-2 capsules 2-3 times a day from one week to two months. Alternatively, you might take 150 mg every day for no more than 12 weeks.

Overdosage is only noticeable at doses several times larger than those recommended, and it is restricted to the consequences of hypotension, which are easily treated.

Contraindications with other Medicines

There are no contraindications to Stresam. It is not recommended for pregnant, breastfeeding, or planning on becoming pregnant.

Like all medications, Stresam can have side effects. The most common side effects are drowsiness, fatigue, and dizziness.

The side effects are usually mild and transient. When taken in the proper dosage, Stresam has no severe side effects.

Side effects of the peripheral benzodiazepine receptor can include:

To avoid side effects, you should take Stresam as recommended.

For instance, Stresam can interact with the following:

If you experience any side effects while taking Stresam, you should stop taking it immediately and contact your doctor.

It would help if you did not stop taking Stresam unless your doctor says so. Stopping it abruptly can cause withdrawal symptoms.

If you take Stresam for longer than two months, you should gradually lower your dosage.

Does Stresam Make You Sleepy?

Drowsiness appears in the initial few days of treatment and goes away on its own as the therapy continues.

Although Stresam is not classified as addictive (definitely not as addictive as benzodiazepines) and stopping therapy with Strezam is not thought to produce withdrawal syndrome, treatment with the medicine should only be terminated as recommended by your doctor.

Is Stresam Good for Anxiety?

Stresam is a good anxiety therapy to try because it has few side effects and does not carry the hazards of the over-the-counter benzo medicines (Valium and others), which can be addictive and impair attention, among other things. Many people find it to be a good fit for them.

But, the drug also has a high incidence of side effects, and it can interact with other medications and supplements.

Despite its disadvantages, Stresam is still worth trying. It has a good safety profile, and it can be considered a valuable supplement for anxiety and tension.