Want a nootropic with far more potency than Piracetam?

Sunifiram could be exactly what you need.

Our Sunifiram review will look into the safety and effectiveness of this nootropic for boosting mood, memory, and learning.

Table of Contents show
What Is Sunifiram?
Effects & Benefits
Enhanced Learning and Memory
Treating Amnesia
Improve Focus and Mental Clarity
Boost Mood and Energy
Increasing Sex Drive
Dosage
Side Effects
Experiences Shared on Reddit
Sunifiram Stacks
Is It Legal?
Is It Safe?
How Long Does It Last?
Where to Buy Sunifiram
Conclusion

By the end, you should have no trouble deciding if this is the right nootropic for you.

Sunifiram (DM-235) [R] is a member of the Racetam family and a derivative of Piracetam. Even though the supplement is relatively new on the scene, it’s already a popular nootropic for enhancing cognition and memory. Even though its effect and structure are similar to Piracetam and other Racetams, Sunifiram is a thousand times more potent.‍

Aside from boosting cognition and memory, it's also a powerful mood lifter and energy booster. Better yet - you get these results even if you use this nootropic in very small doses.

Scientists at the Italian University of Firenze first synthesized Sunifiram in 2000. Sadly, like most other Racetams, there’s very little clinical research into the effectiveness and safety of the compound. But there are animal studies with promising results regarding its effectiveness.

For example, some animal tests show that the nootropic can boost brain power and possibly treat amnesia, Alzheimer’s disease, Parkinson’s disease, and other neurological disorders

Since there’s a shortage of clinical trials, many countries still consider it an experimental drug. For example, in the US, the drug doesn’t have FDA approval for use in human or veterinary medicine. But even though its use and manufacture are unregulated, you can legally buy and use it in the US.

With the lack of accurate studies and human tests, there isn’t a lot of documented research regarding how Sunifiram works. What we do know is it’s an ampakine that works by triggering glutamate receptors in the brain. It also triggers the production and release of acetylcholine, which is a learning neurotransmitter.

As an ampakine, it can cross the blood-brain barrier. Once it does this, its compounds attach to the brain’s AMPA-type glutamate receptors, stimulating glutamate production and high neural activation. The result of this is enhanced memory formation and recall.

Because it’s an ampakine, it also functions as a mild stimulant, boosting your energy and mental alertness. But unlike caffeine and amphetamines that have the same effect, you won’t experience restlessness or other associated adverse side effects.

These effects can benefit you in the following ways:

Like other Racetam nootropics, Sunifiram increases the production and release of acetylcholine. High acetylcholine levels increase the ability to create memories, learn, recall information, and think analytically. It's why many students use nootropics as a study aid.

While there’s a shortage of human studies, animal studies prove that Sunifiram is a powerful nootropic that can boost memory retention, learning speed, and recall. Anecdotal evidence from users also indicates that it positively impacts learning and understanding.

Aside from boosting learning, animal testing involving rats shows that doses of Sunifiram can reverse chemically-induced amnesia.‍ Theoretically, this could also mean that it is suitable for treating amnesia in humans, and possibly neurological conditions like Alzheimer’s and Parkinson’s disease.

Many Sunifiram users state that using the supplement boosts their focus and mental clarity. These effects help users better concentrate on tasks and be more productive.

Improved focus and clarity could be due to it triggering the release of the cognitive ability boosting neurotransmitter, acetylcholine.

Several users claim using the supplement lifts their mood, giving them a brighter disposition and a more positive mindset. There are also reports of feeling more energetic. These are likely due to its effect as a mild stimulant.

While there's no research to back it, certain users claim that it has an aphrodisiac effect. But note that this libido boost isn't experienced by all users, meaning you might or might not feel it after trying the drug. 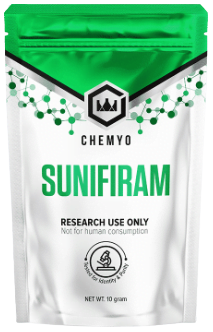 Since Sunifiram is more potent than other nootropics (1000 times more than Piracetam), taking it in smaller doses will still deliver the desired effect. That said, finding a legitimate recommended dose is tricky since the supplement is unregulated, and there are very few human trials regarding its use.

Based on the experience of other users, 5-10 mg three times a day is more than enough. You can take it orally or sublingually. However, sublingual usage will get it into your bloodstream faster. To be on the safe side, start at the smallest, most effective dose, and work your way up from there if necessary. Also, to avoid developing a tolerance, use it cyclically instead of continuously.

There are no serious reported side effects from using Sunifiram. Also, the drug has no known toxicity threshold, which means there are no known risks of overdosing.

That said, some users have reported some minor and fleeting side effects. Some of these side effects include:

The headache and insomnia could be due to the supplement’s mild stimulant effect. You can prevent insomnia by avoiding using it late in the day and headaches by using choline supplements.

If it's your first time using nootropics, we recommend you play it safe by not going beyond the dose mentioned above. Also, it might be better to consult your doctor before using the supplement, especially if you are on other medications.

Here’s feedback from real people on Reddit after trying Sunifiram:

“I have been taking suni for a few months now because its amazingly helpful in my math class. I was at a dose of 25mg three times a day but now ive dropped to 10mg…”

“Sunifiram at 5mg sublingually gives me an intense laser-like focus that is actually rather uncomfortable, especially in social settings. I would liken it to a mega dose of Noopept.”

You can stack Sunifiram with other nootropics to boost its effect. But since the supplement is already super potent, you have to be careful what you stack it with and the dose you use.

If you want enhanced cognitive effects, you can stack Sunifiram with other Racetams like Oxiracetam, Noopept, or Piracetam. It’s best to also add a choline supplement to the stack, such as CDP choline or Alpha GPC. Doing so will reduce the risk of headaches and other side effects that come from Racetams exhausting your brain’s choline reserves.

For mood enhancement, you can stack Sunifiram with Aniracetam. Alternatively, you could stack it with L-theanine, which is a great choice since it boosts the brain’s natural production of dopamine and serotonin.

The medical use of Sunifiram isn’t approved in the US. Nonetheless, you can legally purchase, use, and possess it.

There are no toxicity thresholds or serious side effects associated with the use of Sunifiram. That means there’s no risk of overdosing even when using it in high doses. And based on the reports of users, the side effects it does have are slight and fleeting.

The half-life varies based on each individual's physiology, the dose taken, and other factors. But on average, Sunifiram has a half-life of 1-2 hours.

Where to Buy Sunifiram

You can buy Sunifiram online from several vendors. But if you want a safe product that delivers the best results, buy Sunifiram from a reputable vendor with a track record for selling genuine nootropics. Offering high-quality products at competitive prices, Chemyo is just that vendor.

There are several ways to benefit from using Sunifiram – it boosts mood, energy levels, cognitive functioning, focus, and more.

But more importantly, it's safe.

Only a small dose is needed to get your desired results.

Therefore, it’s cost-effective, because you can use a batch for a more extended period.