In this Bromantane review, we'll take an in-depth look at what this popular nootropic is. We'll also go over how Bromantane works in the brain, information about the benefits, side effects, and where you can buy it online.

Whether you suffer from depression, anxiety, or lack of focus and declining stamina during workouts, you may have looked for a supplement that can give a little extra kick to keep you going.

Bromantane promises to provide that kick, helping you clear the effects of depression and fatigue and keeping your brain more on task to improve overall performance.

But what is Bromantan exactly and how does it work?

How do you use it, and what sort of side effects can you expect, if any?

If you're looking for a powerful nootropic that can help you get an edge in your work or studies, Bromantane is worth considering. 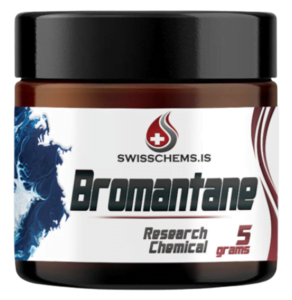 Bromantane [R] — also known as Ladasten or NP-160 — is a nootropic drug that is a synthetic adaptogen (actoprotector) shown improvement of mental and physical performance throughout the body by helping the brain increase and regulate neurotransmitters. It's classified as a mild stimulant and can help with chronic kidney disease (CKD) and idiopathic pulmonary fibrosis (IPF).

In the 1980s, Russian scientists developed the synthesis Bromantane, which led to improved performance of workers under environmental stressors like heat. The development of the drug enabled workers to focus better with greater motivation, effectively increasing physical work capacity. It's also approved in sports medicine and used for treating asthenic disorders such as neurasthenia in Russia.

Nootropics as a group are commonly known as ‘smart drugs’ because of the way they operate in the brain.

According to clinical research and more than one study in mice, Bromantane works through stimulating increased activity in the hippocampus, the area of the brain that controls and regulates the production of neurotransmitters such as dopamine and serotonin [R]. Unlike most typical psychostimulants, it's been found to also exert anxiolytic effects as well as a decreased toxic effect of certain agents in rats. Its anxiolytic effect can be contributed to its ability to strentghen GABA-ergic mediation while reducing gene expression. Its positive influence on the immune system and inflammation is also well-documented, although its exact mechanisms of action are unknown.

Bromantane is an adamantane derivative, which has a variety of uses in other derivatives, chemical, medical, and even industrial fields due to its unique, stable structure.

Similar to typical stimulants, Bromantane's properties and benefits include its positive effect on energy, dopamine reuptake by increasing tyrosine hydroxylase, reduction of anxiety (see Eksp Klin Farmakol in Russian), better coordination during movement, and better concentration on tasks by helping increase serotonin production and use, resulting in an overall improvement of mental performance even under extreme conditions and physical loads without increasing oxygen consumption.

However, regulators at the Food and Drug Administration (FDA) in the United States haven’t fully approved Bromantane yet.

Clinical trials and their data continue on to-be-proved benefits, but the Olympic committee banned Bromantane use in professional athletes, which disqualified many Olympians from Russia for the foreseeable future.

What Are The Benefits Of Bromantane?

The main benefits of Bromantane are improved mental and physical performance and that it also enhances immunity. It helps you work more efficiently, stay focused and energized, and improve your libido. It's non-addictive and non-habit forming, and the effects last for many months after quitting use.

How To Take Bromantane?

Bromantane comes either in simple capsule form or powder form. Ladasten pills come in 25 mg doses that are easy to swallow, but you should take it with meals. It’s best to start slow and take no more than the recommended dosage, as discussed below.

Women metabolize and absorb Bromantane faster than men, so they may need a larger dose to get the same results. Take care not to take it just before bed, as it can result in interrupted sleep due to the high energy and mental acuity it causes.

You want to be relaxed before heading to sleep, and Bromantane (also known as ADK-709) can interfere with that goal according to our analysis of the product.

Even a single treatment with Bromantane has resulted in an increase in spontaneous motor activity and reflexes.

As with any drugs, getting the dosage right and figuring out what works for you is an essential step in taking full advantage.

When it comes to new drugs that you aren’t used to, take it slow and see how you react to them under different conditions. Most Bromantane capsules come in amounts of 25 milligrams (mg), so start with one per day for a while to determine how you respond to it.

If you bought the powder form, start with an amount of 25 mg as well.

We recommend using a bottle of Bromontan solution because drops allow dosages to be most accurate. Store at a cool temperature to preserve quality and efficacy.

As we mentioned above, women metabolize Bromantane faster, so they may want to adjust the initial dose to 50 mg as they test its effectiveness to account for the differences how the substance is being metabolized.

In very high doses it has been found to produce anticholinergic effects in experimental animals. Although this isn't relevant for common clinical doses, it therefore makes sense to stack it with a Choline source such as CDP Choline or Alpha GPC.

Make sure to talk to your doctor before you take this or similar products to ensure you don't run into health problems other adverse symptoms.

Without comprehensive human trials, it’s hard to say what sort of side effects you might experience at what dose, aside from anecdotal evidence and a few animal studies.

Bromantane is non habit-forming and doesn't result in addiction behavior, so you don't have to worry about addiction or withdrawal.

The few adverse effects of Bromantane listed might sound counterintuitive considering the intended action of it. But they include fatigue, brain fog, depression, and light confusion. In studies with lab mice at a very high doses, diarrhea, vomiting, and insomnia occurred, which is another good reason to stick to recommended amounts to avoid toxicity.

As we mentioned above, don’t take Bromantane before bed. It ramps up brain activity, making it difficult to sleep. Most people report no side effects at all. But when they do experience any, they feel the energy boost suddenly wearing off, causing a sudden crash.

Here is a sample of customer reviews taken from Reddit:

Where To Buy Bromantane?

There are many online websites offering places to buy Bromantane.

But the best we’ve found is Swiss Chems, which provides 5 grams of Bromantane in powder form for a very reasonable price.

They also offer a terrific shopping experience in an accessible layout for a variety of other nootropic supplements and compounds.

Don’t expect to find it at your local natural supplements shop or on Amazon - only specialized online stores have Bromantane for sale.

Is There A Recreational Use For Bromantane?

Bromantane has no actual 'high,' and it isn't habit-forming. There is no addiction potential and there are no withdrawal symptoms. It improves brain function, increases dopamine levels, alertness, and helps people keep focus and concentration on tasks while helping alleviate anxiety and depression, so there isn't necessarily a 'recreational' use as it's commonly understood.

Is Bromantane Good For ADHD?

Because many of the alleged benefits of Bromantane have yet to be verified, it's hard to say with any certainty that it works to manage ADHD symptoms. You can refer to anecdotal evidence and case reports compiled by patients. It does seem to improve productivity and reduce stress, although its exact mechanism and actions are unknown.

Yes, you can take Bromantane sublingually to increase its effectiveness according to articles found online.

How Do I Make Bromantane Solution?

How Long Does It Take To Work?

The acute effects of Bromantane have a gradual onset over 1 to 2 hours and last for 8-12 hours.

The elimination half-life of Bromantane in humans is about 11.5 hours.

Bromantane, or Ladasten, is an exciting nootropic drug that shows a lot of promise to mitigate a wide variety of mental issues such as depression, anxiety, and possibly even ADHD.

By increasing dopamine production and helping to regulate serotonin receptors, it provides a framework for focused action, whether it's staying alert and active throughout a repetitive task like assembly line work, working out at the gym, or even studying for a test.

Unfortunately, the United States' FDA hasn't tested or approved Bromantane for general use, so many of its claimed benefits of application come from anecdotal evidence and the work of the Russian scientists who developed it. The information in literature and on Wikipedia seem to back this up.

Bromantane is an officially banned performance enhancement through the International Olympic Committee, but that only serves to add legitimacy to its claims and pharmacology, so long as you're not a professional athlete.