Note: The average TAT for amounts of 1 g or more is 60 days. Every wholesale order is freshly synthesized in our lab to guarantee the best possible quality.

Table of Contents show
What Is GSB-106?
How Does the GSB-106 Nootropic Work?
GSB-106 Versions
GSB-106 Side Effects
Where to Buy GSB-106?
Frequently Asked Questions (FAQ)

GSB-106 is made of two groups of amino acids amino acids, and joined together with a linker. This gives it the name “dimeric dipeptide”. It’s part of a series of dipeptides released by Russia, which forms part of their dipeptide arsenal, including noopept (GVS-111), GB-115, and GK-2 and several more.

The region of BDNF that was chosen to be copied was only four amino acids long, as it was only copying the most exposed parts beta-turn loop 4 (BDNF-Asp 93-Ser 94-Lys 95-Lys 96-) of the BDNF protein.

This peptide could also be called a tetrapeptide, as it has four amino acids.

It is the first dimeric dipeptide to copy BDNF, and it is unusually potent. 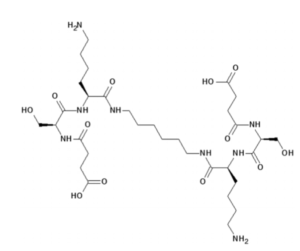 How Does the GSB-106 Nootropic Work? 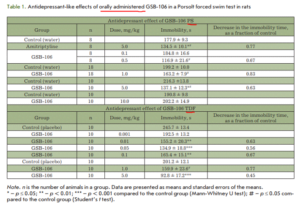 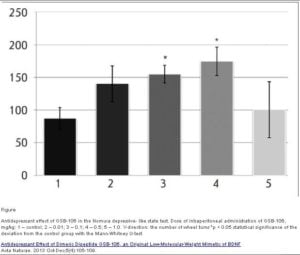 It works by copying the outer (or lateral) structures of BDNF, which is the part that interacts with the most important receptor that BDNF can trigger.

“. The beta-turn sequences of BDNF hairpin loops were chosen as the basis of design because they are most likely to interact with the receptor due to their accessibility”

The most important thing to understand about GSB-106 is that it was designed to copy the structure of BDNF, loop 2, in order to do one single task: Agonize TrkB enough to trigger Erk and Akt. Only when triggering both pathways do we observe the strong antidepressant effects from TrkB that are so renowned in the world of anti-depressants. 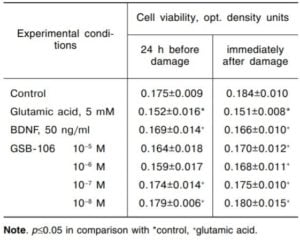 Fig. 2 -Here, GSB-106 was found to increase cell density in vitro, stronger than BDNF itself, when GSB-106 is given before and after damage [R].

Erk grows dendritic trees and synapses (and consequently microtubules), and usually happens alongside transient PKC activity (via DAG), which will increase AMPA insertion, which strongly promotes neural activity, even in GABA cells. 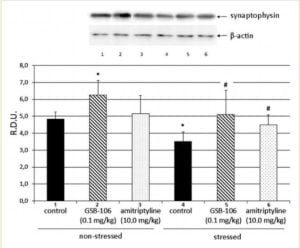 Fig.3 – Here [R], we can see the levels of synaptophysin, which is a marker for post-synaptic development, and can be considered a measure of the number of synapses, and their functionality. There are three groups, within two conditions, the high stress group and normal stress group, and the control group. Importantly for people looking for new nootropics, GSB-106 managed to make significant gains of synaptophysin levels in the non-stressed group compared to control. The stressed group only approached significance, probably due to the large deviations. The analysis was performed four days after a single administration of 1 milligram, not 100mcg.

Synaptophysin content increased from 6 to 9 [R] in relative units, after 21 days of 5mg injections (approx., for a 65kg human), this could actually be too high. It measured the entire hippocampus. It’s odd that 10 days of administration didn’t show any changes, but a single lower dose did increase the same marker (synaptophysin) for four days afterwards in rats. The paper explains that synaptogenesis is the last stage of neurogenesis, and it takes three weeks before synapses are generated from the point of proliferation.

“It is known that synaptogenesis takes place at the last stage of neurogenesis, including proliferation (~25 h), differentiation (~4– 10 days), migration (~2 weeks), and then integration of neurons into the brain to form synaptic contacts with the surrounding cells [11]. This is probably why we observed no increase in the content of the synaptogenesis marker synaptophysin on day 10 after the GSB-106 administration but detected an increase on day 21 [R].”

Fig. 5- The lower half concerns the highly bioavailable Tablet dosage formula, whilst the upper half is just powdered GSB-106 in water, both given orally. The lower the value in the ‘decrease in immobility time’ column, the stronger the antidepressant effect.

Interestingly 100mcg was stronger than 1mg, and 500mcg was only beaten by 50mg, which managed a shocking strength of effect, despite highest doses usually giving a pro-depression effect.

The first form of GSB0-106 is the normal powdered peptide, called “Pharmaceutical substance” in the research studies. This is technically orally bioavailable, yet highly inefficient none the less. Doses do have to be high for oral administration, and might be better used as an intranasal spray than orally taken, in this form.

Subcutaneous injections are around 250mcg to 550mcg. (all calculations are converted to a 65kg human). Rats have doses of around 1mg. However, I would expect 100mcg for several days to be very useful. I think there is good reason to think that some of the earlier studies dosed beyond the most efficacious dosage.

The second form is designed to be better used for oral administration, and so far, it even seems stronger than injections. This form is called a “Tablet dosage form”.

It uses a dispersion system called Kollicoat IR (amongst several other basic and cheap ingredients),that creates an instant release dispersion dynamic (a.k.a, I don’t know) that makes GSB-106 amazingly potent.

The third is an acetylated version of GSB-106, with increased protective, but diminished growth effects. [R] [R]

It has been tested for any influences on neural toxicity, weight loss, pain changes, changes in behaviour and for withdrawal symptoms, post-use depression, and if the effects reduce over 28 days of consistent use, ONLY IN RODENTS.

No changes in weight gain, neural toxicity were found.

Pain threshold was increased, reaching a maximal increase 24hours after use [R] (meaning LESS pain). This is a novel way to lower pain sensitivity, and could be helpful to some, but also unhelpful to others.

It was classified as behaviorally active in a locomotor test performed 5 minutes after GSB-106 administration. It significantly increased locomotor movement [R].

Cessation after 28 days of continued use, led to no increase in depression, and the primary measure of anxiety also didn’t show any negative rebound influence. However a secondary measure of anxiety did show a significant increase in grooming behaviour on the 1mg per day dose. The higher dosage group had lower grooming than any other group, despite cessation [R]. They concluded with the notion that GSB-106 does not have diminished returns and has no side effects after use.

It is a weak antidiabetic [R], by nature of it activating the Akt pathway. Insulin also does this, and glucose toxicity leads to reduced Akt activity, and is considered a pathological consequence. Those with prediabetes or diabetes (treated or untreated) may experience lower blood glucose. Other Dipeptides show especially strong antidiabetic activity, lasting for very long periods of time after a single administration, using a similar pathway (different receptor). This means diabetics would need to change their level of insulin after continued use of GSB-106, in theory, assumptions aside.

Has GSB-106 been tested in humans?

GSB-106 has been suggested for being worthy of clinical trials, and possibly is currently in trials. The necessary kinetic studies were carried out in 2019. Of course, it’s been mentioned for human testing in the studies. You wouldn’t be reading about it if they hadn’t. However there are no reported examples of humans using it, ever.

It possessed a lethality rating of 5 which is lowest rating available according to a Russian standardization made in the 60’s (when drugs were more lethal hah), as the amount needed to kill 50% of the population of rats was so high.

7,8-DHF also acts directly on TrkB, (but also has anti-oxidant effects that are present even when cells don’t express TrkB) and has reports of reducing depression and anxiety, and helping a. There are conflicting reports on its effect on neurogenesis. The dosage for 78DHF is 5mg/kg for rats, via injection. That’s approx. 50mg for a 65kg human for a single dose. However, GSB-106’s optimal mouse dosage is 500mcg, it’s better at stimulating ERk (closely tied to learning), is neurogenic (Ki67), and is suitable for intranasal administration, which will provide access to those all too important brain areas.

Does GSB have diminishing benefits from continued use?

The evidence points to sustained efficacy. Increased neural markers even after 21 days exposure, and extended antidepressant effects after 28 days of “Pharmaceutical substance” oral administration at 10mg and 50mg doses. [R]

But, we shouldn’t be aiming for the highest doses, we should aim to trigger TrkB as much as possible, by utilizing it’s sensitivity to the duration and extent of stimulation, on the chances to keep its stimulated for long periods of time.

This graph exemplifies the potency of GSB-106 [R]

NOT FOR HUMAN CONSUMPTION