This review will examine Hydrafinil's nootropic features, benefits, and side effects. We will also discuss the appropriate dosage and how Hydrafinil can be used to improve cognitive function.

Fluorenol is the chemical name for Hydrafinil, a derivative of fluorene (9H-fluorene). The most important isomer, 9-hydroxyfluorene, has a hydroxyl group on the bridging carbon between the two benzene rings. This location makes hydrafinil a strong cognitive enhancer because it allows for easy blood-brain barrier (BBB) penetration.

The BBB is a highly selective semipermeable barrier that protects the brain from harmful chemicals and toxins. However, it also blocks many potential therapeutic agents from reaching the brain. This is why Hydrafinil's ability to cross the BBB is so important for its nootropic effects.

Let's look closely at what the research says about Hydrafinil and its potential nootropic use.

Hydrafinil is a eugeroic compound, meaning it promotes wakefulness and alertness. It is also a potent cognitive enhancer that improves memory, focus, and executive function by penetrating the blood-brain barrier (BBB). Hydrafinil is a weak dopamine reuptake inhibitor (DRI), making it less likely to cause addiction or withdrawal than other eugeroics like Modafinil and Adrafinil.

The only downside to Hydrafinil is that it is not as well-researched as other eugeroics. However, the available evidence suggests that Hydrafinil is a promising nootropic with few side effects. 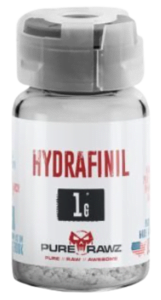 Hydrafinil (fluorenol) is a nootropic substance of the eugeroic class. Eugeroics are also known as wakefulness-promoting agents (WPA) and are typically used to treat excessive daytime sleepiness (EDS) in narcolepsy or obstructive sleep apnea (OSA).

They work by stimulating the release of orexin, a neuropeptide hormone responsible for regulating wakefulness and arousal [1].

Hydrafinil is a weak dopamine reuptake inhibitor (DRI), which prevents the neurotransmitter dopamine from reabsorbing back into the brain cells. This leads to increased dopamine levels in the brain, which is associated with wakefulness, motivation, and pleasure [2].

In recent years, Hydrafinil has become increasingly popular as a cognitive enhancer and study drug among college students and working professionals. Its stimulating effects are said to improve vigilance, alertness, attention, and focus while also reducing fatigue and boredom. Some users even report enhanced motivation, productivity, and mental clarity.

Compared to other wakefulness-promoting agents such as Modafinil and Armodafinil, Hydrafinil is not as well-studied. However, it is thought to produce similar effects with fewer side effects. One study published in the journal; Bioorganic & Medicinal Chemistry Letters, compared Hydrafinil's effects to those of Modafinil in mice [3].

The study found that both drugs produced similar effects on wakefulness, but Hydrafinil was 39% more effective than modafinil at keeping mice awake over a 4-hour period.

While more research is needed to confirm these findings, they suggest that Hydrafinil could be a more potent and effective wakefulness-promoting agent than Modafinil.

Hydrafinil is not currently approved for any medical use, but the unscheduled nature of fluorenol in the United States means that it falls into a legal grey area in most countries, thus, allowing for its legal purchase and consumption.

How Does Hydrafinil Work In The Brain?

The exact mechanism of action of Hydrafinil is still unknown. However, it is thought to work by inhibiting the reuptake of dopamine. This leads to increased dopamine levels in the brain and produces wakefulness-promoting and stimulating effects [4].

The lipophilicity of fluorenol allows it to cross the blood-brain barrier more easily (BBB). Once in the brain, fluorenol binds to and inhibits the dopamine transporter (DAT), which is responsible for dopamine reuptake. This leads to increased dopamine levels in the brain.

Lipophilicity simply refers to a molecule’s ability to dissolve in fats and oils. The BBB is a layer of cells that separates the bloodstream from the brain. It’s responsible for regulating what goes in and out of the brain.

Dopamine is a neurotransmitter that plays an important role in regulating mood, motivation, and cognition. It’s also involved in the brain’s reward system and is associated with pleasure and reinforcement.

The DAT is a protein that transports dopamine from the synaptic cleft back into the neuron. Inhibiting the DAT leads to increased dopamine levels in the brain, which produces wakefulness-promoting and stimulating effects [5].

What Is Hydrafinil Used For?

Hydrafinil is not currently approved for any medical use. However, it is effective in promoting wakefulness and reducing fatigue. This makes it a great alternative for people who struggle with sleep disorders such as narcolepsy, shift work sleep disorder, and obstructive sleep apnea.

Since Hydrafinil provides similar cognitive effects as Modafinil but is more potent, some students increasingly use it as a study drug to help them focus and stay awake for long periods of time.

However, it's still not as popular as Modafinil, and according to an online survey with over 3000 respondents, only 2% of Modafinil users have reported using Hydrafinil [7].

What Are The Benefits Of Hydrafinil For Cognition?

Although few studies on Hydrafinil have been peer-reviewed, many people who have taken the compound have published anecdotal reports with promising results [8]. What stands out most is how similar the effects of Hydrafinil are to Modafinil, which is one of the most popular and well-known cognitive enhancers.

The benefits of Hydrafinil for cognition include:

Where To Buy Hydrafinil Online?

If you're looking to buy Hydrafinil online, PureRawz is the best place to do so. Not only does the vendor offer high-quality data sheets for each chemical offered, but they also include security audits to ensure quality control.

They offer 2 different Hydrafinil options: Liquid and Powder. The powder form comes in a 1-gram bottle and costs $31.48 (USD).

Let's take a look at some user experiences with Hydrafinil from Reddit.

"…I tried Hydrafinil for the first time yesterday in the form of one 50mg capsule. Took it about 4 am with some coffee and my daily vitamins. About 45 mins I noticed first effects. An hour in I was experiencing some pretty strong (for afinils) stimulation, which took me by surprise as I wasn't expecting much from 50mg…"

"…Then this evening I took 60mg and then this amazing experience happened. I felt euphoric for more than an hour and just felt very calm and centered. Just this amazing feeling of calm and well being!!! Lasted for as 3-4 hours and no crash atm still…"

"For those who are curious, I find hydrafinil to be more potent than modafinil. What I like about it is that I can take much less and still get the same effects. A 50-100mg dose of modafinil will put me at about 85-90% of where 200mg of modafinil would put me..."

How Do You Take Hydrafinil For Cognitive Enhancement?

Hydrafinil is best taken on an empty stomach, 30-60 minutes before you need to be awake and alert. Since the effects of Hydrafinil can last 6-8 hours, it's best not to take it late in the day as it may interfere with sleep.

Some people split their dosage in half, taking one half in the morning and the other half in the afternoon. Others take it all at once in the morning. There is no wrong way to take Hydrafinil, as long as you don't take it too late in the day.

There is no need to cycle Hydrafinil, but some people prefer taking a break from it after a few weeks of use. This is completely up to the individual.

What Is The Recommended Dosage For Hydrafinil?

It's always best to start with a lower dose and increase it as needed. This will help you find the sweet spot for your body and avoid any potential side effects.

What Are The Side Effects Of Hydrafinil?

If you experience any of these side effects, you should lower your dose or take a break from Hydrafinil for a few days, and the side effects should go away on their own. If you want to prevent headaches, we highly recommend stacking Hydrafinil with a potent choline source such as Citicoline or Alpha GPC.

Overall, Hydrafinil is a very well-tolerated drug with few side effects when taken in the 50-150 mg dosage range. However, as with any drug, there is always the potential for rare side effects to occur. If you experience any serious side effects, stop taking Hydrafinil and consult with a healthcare professional immediately.

What Nootropics Are Similar To Hydrafinil?

Nootropics that are similar to Hydrafinil include Modafinil, Adrafinil, and Armodafinil. These drugs are all eugeroics, meaning they are used to promote wakefulness and vigilance. They all have similar effects on the brain, but the potency is the main difference.

Hydrafinil falls into a grey area in the United States. It is not currently scheduled, but since it's similar to Modafinil and Armodafinil, we recommend checking with your local laws before buying or using it.

What Brain Supplements Can Hydrafinil Be Stacked With?

If you're looking for a well-rounded brain supplement to take with Hydrafinil, we recommend NooCube. NooCube is a nootropic blend that contains 13 clinically-proven nootropic ingredients that work together to support cognitive function.

NooCube contains choline, which can help to prevent headaches often associated with nootropics like Hydrafinil. It also contains Bacopa Monnieri, an ingredient that has been shown to improve memory and learning.

NooCube is the perfect foundation on which to build your nootropic stack. It's safe, effective, and backed by science. Plus, it's all-natural, so you don't have to worry about any nasty side effects.

So, if you're looking for a nootropic to take with Hydrafinil, we recommend NooCube. It's the perfect foundation on which to build your nootropic stack.

You can find NooCube right here:

Let's take a look at some frequently asked questions about Hydrafinil.

How Long Does It Take For Hydrafinil To Work?

Hydrafinil kicks in after 30-60 minutes. The effects peak after 2-3 hours and last for 4-6 hours. Combining Hydrafinil with Caffeine can enhance the effects of Hydrafinil and make it work faster.

How Does Hydrafinil Make You Feel?

Hydrafinil makes you feel more alert and awake. It can also increase focus, concentration, and make you feel more motivated. Some users also report feeling more euphoric on Hydrafinil at 150 mg or higher.

What's The Half-Life Of Hydrafinil?

Is It Safe To Use Hydrafinil?

According to scientific research, Hydrafinil is safe to use at the recommended dosage. However, like all drugs, there is a potential for side effects. The most common side effects include headaches and insomnia.

So what do we know about Hydrafinil?

Hydrafinil is a potent eugeroic that can keep you awake and alert for hours. It works by inhibiting the reuptake of dopamine, leading to increased dopamine levels in the brain. It also works on the orexin system, which is responsible for wakefulness.

Hydrafinil is similar to Modafinil and Armodafinil, but it is more potent than both of these smart drugs. It also has a shorter half-life, which means it wears off faster.

Hydrafinil is in a grey zone in the United States. It is not currently scheduled, but since it's similar to Modafinil and Armodafinil, we recommend checking with your local laws before buying or using it.

Hydrafinil stacks well with NooCube. NooCube is a well-rounded nootropic supplement that contains 13 clinically-proven nootropic ingredients. It's safe, effective, and all-natural. Plus, it's the perfect foundation on which to build your nootropic stack.