This review will examine Fasoracetam's nootropic features, benefits, and side effects. We will also discuss the appropriate dosage and how Fasoracetam can be used to improve cognitive function.

Are you looking for a powerful nootropic that can improve your cognitive function?

If so, you may want to consider trying Fasoracetam. This nootropic has a variety of benefits, including improved memory and focus. Additionally, it is relatively well-tolerated with few side effects.

Fasoracetam belongs to the racetam class of nootropics. Racetams are a class of smart drugs with a common structure and mechanism of action.

Let's take a closer look at Fasoracetam and see what this nootropic can do for you.

Fasoracetam works by modulating receptors in the brain that are involved in acetylcholine and glutamate signaling. Acetylcholine is a neurotransmitter associated with learning and memory, while glutamate is involved in cognitive function and neural plasticity (the ability of the brain to change and adapt). 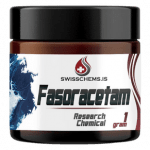 Fasoracetam (also known as (5R)-5-Oxo-D-prolinepiperidinamide monohydrate, NS-105, NFC-1 and LAM-105) is a research chemical that belongs to the racetam class. It was discovered by scientists at the Japanese pharmaceutical company Nippon Shinyaku.

Fasoracetam has been investigated as a possible nootropic for treating dementia with vascular injury but failed to demonstrate sufficient efficacy in clinical trials. The company brought it through Phase 3 clinical trials for vascular dementia but later abandoned it due to a lack of said efficacy.

Currently, it is being researched for its potential usefulness in treating attention deficit hyperactivity disorder (ADHD) [1].

How Does Fasoracetam Work In The Brain?

According to Elia, Josephine, et al., Fasoracetam positively affects cognitive function in rodents by binding to all three groups of metabotropic glutamate receptors. These are mGluR1, mGluR5 and mGluR8.

An agonist is a molecule that activates the receptors. In other words, the binding of Fasoracetam to mGluRs results in increased binding of agonists to mGluRs [2].

In addition to its binding activity on mGluRs, and since Fasoracetam is a racetam, it's also hypothesized to have direct cholinergic activity. This means that it can increase the neurotransmitter acetylcholine (ACh) levels in the brain [3].

Acetylcholine is important for learning and memory. It's also decreasing in the brain with age which is one reason why cognitive decline is associated with aging [4].

What Is Fasoracetam Used For?

Fasoracetam has been studied primarily for its therapeutic benefits in patients with ADHD, Autism Spectrum Disorder (ASD), and Alzheimer's Disease [5]. A small number of clinical studies have shown some promising results, but more research is needed to confirm these findings.

Elia, Josephine, et al., in a study published in Nature Communications in 2018, discovered that the mGluR activator Fasoracetam is safe and efficient for treating ADHD in adolescents with mutations in mGluR network genes.

The CGI-I and CGI-S scores showed significant improvement from baseline to week 5, with the mean score decreasing from 3.79 to 2.33 for the CGI-I score and from 4.83 to 3.86 for the CGI-S score.

Thus, the findings suggest that Fasoracetam is a helpful medication for adolescents with ADHD who have mutations in mGluR network genes.

What Are The Benefits Of Fasoracetam For Cognition?

Fasoracetam has been shown to improve rodent cognitive function by binding to metabotropic glutamate receptors and increasing synaptic transmission. In addition, Fasoracetam is a racetam and thus has direct cholinergic activity, which means it can increase the neurotransmitter acetylcholine (ACh) levels in the brain.

This means that Fasoracetam can improve learning, memory, and other cognitive functions.

The benefits of Fasoracetam for cognition include:

Where To Buy Fasoracetam Online?

We recommend purchasing from a trustworthy and reputable source like SwissChems. The price for 1 gram of Fasoracetam powder is $20.99.

SwissChems is one of the leading providers of nootropics and research chemicals. All their products are 3rd party lab tested for purity and quality, and they offer fast shipping worldwide.

Let's take a look at some of the things people are saying about Fasoracetam on Reddit.

"…I just started taking it a few days ago. I tried 20 mg by mixing it with water in a shot glass, then drinking it. I didn't notice anything the two times I tried that. This morning, I took 30 mg sublingually, and certainly noticed a difference. I felt calm, even though I have things coming up to stress about (school exams). Had a super productive day, no problems with staying focused…"

"Been taking it since the start of the year. First as a means to not develop a tolerance to phenibut bit soon I noticed it benefits on its own. Its like being on a low dose phenibut constantly. I often times had this "man if this doesnt work out im f****d" anxiety which is completely gone since using it…"

"I have been taking Fasoracetam for the last 2 weeks (almost every day) and having the same incredible anti-anxiety effects. Dose ~15mg sublingual. It's the only thing that helped, and I've tried benzos, phenibut, ashwaganda, l-theanine, bacopa, aniracetam. Haven't noticed any tolerance and hoping it won't be an issue with this substance…"

How Do You Take Fasoracetam For Cognitive Enhancement?

Fasoracetam is water soluble and can be taken with or without food. We recommend starting with a smaller dose and working up to a higher dose as needed. Many people find that taking it 2-3 times daily works well.

Some people like to cycle fasoracetam, taking it for a few weeks and then taking a break for a week or two. There is no evidence that this is necessary, but some people find it helps them avoid building tolerance.

What Is The Recommended Dosage For Fasoracetam?

There's no official recommended dosage for Fasoracetam, but based on clinical studies and anecdotal reports, a common starting dose is 10-20 mg daily. We recommend starting on the lower end of this range and increasing as needed until you find the best dose.

Some ADHD trials have used upward of 800 mg daily without any adverse effects, but most people find that anywhere between 10-100 mg is the sweet spot for cognitive enhancement.

What Are The Side Effects Of Fasoracetam?

Based on the experience of users and the few available clinical trials, Fasoracetam seems safe for human use, especially when used in reasonable doses. The risk of developing tolerance or dependence is also minimal.

That said, same as with other nootropics, some users may experience mild and transitory symptoms, such as:

If you keep experiencing such side effects after using a choline supplement, your body may not be compatible with it. Also, since there's a shortage of information regarding specific interactions between Fasoracetam and other drugs, avoid using this novel cognition enhancer if you are on any prescription medication or have pre-existing medical problems.

People with impaired kidney function should also avoid using the drug or consult a doctor before using it. The same goes for pregnant or nursing women.

What Nootropics Are Similar To Fasoracetam?

Nootropics that work by modulating acetylcholine levels and/or increasing choline output may provide similar benefits as Fasoracetam. These include:

All 3 nootropics are widely available online and have been extensively researched. If you're looking for a milder cognitive enhancer, Piracetam may be a good choice. If you want something with a more potent effect, Aniracetam or Oxiracetam may be better options.

What Brain Supplements Can Fasoracetam Be Stacked With?

If you want to enhance the effects of Fasoracetam, we recommend stacking it with a choline supplement such as Alpha GPC or Citicoline.

Alpha GPC and Citicoline are both effective choline sources that can help increase your brain's acetylcholine output. This, in turn, will make the effects of Fasoracetam more pronounced. They will also prevent any side effects of choline deficiency, such as headaches and fatigue.

In addition to a choline supplement, we also recommend stacking Fasoracetam with a powerful foundation nootropic blend like NooCube. NooCube contains 13 clinically-proven nootropic ingredients that can help improve focus, mental speed, and memory.

When combined with Fasoracetam, NooCube can help you achieve optimal cognitive performance and overall brain health.

How Long Does It Take For Fasoracetam To Work?

Fasoracetam works within 2-4 hours after ingestion, with the effects peaking around 12-24 hours. However, since it takes time for the drug to increase choline output, optimal benefits may only be achieved after several weeks of regular use.

How Does Fasoracetam Make You Feel?

Fasoracetam makes you feel more alert, focused, and motivated. It also provides a mild sense of well-being and increased cognitive clarity. It has anxiolytic, neuroprotective, and anti-stress effects.

What's The Half-Life Of Fasoracetam?

The half-life of Fasoracetam is 1.5 hours, meaning it will stay in your system for up to 6 hours.

Is It Safe To Use Fasoracetam?

Fasoracetam is considered to be safe for most healthy adults. However, it is not recommended for people with impaired kidney function or pre-existing medical conditions. Pregnant or nursing women should also avoid using the drug.

So what do we know about Fasoracetam?

Fasoracetam is a smart drug that modulates acetylcholine levels (ACh) and increases choline output. It has been shown to improve memory, focus, and overall cognition in animal studies.

In human studies, Fasoracetam has been shown to be effective in treating ADHD and improving cognitive function in people with mild cognitive impairment. The most common side effects of Fasoracetam are headaches and fatigue. These symptoms can be reduced by combining the drug with a choline supplement.

We recommend stacking Fasoracetam with a choline supplement and a powerful foundation nootropic blend like NooCube for optimal cognitive performance.