Fighting memory loss as we age is something that we could all hope is possible. There's nothing we can do about it. That's the natural course of life, and science can only do so much.

But what if we finally got the answer?

What if Nicergoline is what we've been yearning for?

With its abstract background Nicergoline is created as a semisynthetic ergot derivative that possesses a selective alpha-1A adrenergic receptor blocking property and various mechanisms of action in the brain and peripheral nervous system.

Acromegaly, excessive prolactin, Parkinson's disease, diabetes type 2, hemorrhages, migraines, cluster headaches, and dementia are all treated using ergot derivatives. To alleviate symptoms, they limit the quantity of prolactin and hormones in the body.

It's been used in over fifty nations for more than 30 years to treat problems like cerebral infarction, acute, and chronic peripheral circulation abnormalities, vascular dementia, and Alzheimer's disease, and it's also been proven to help with a range of other ailments.

In many countries, it's been utilized for frontotemporal dementia, early-onset Lewy body dementia, and Parkinson's dementia.

Nicergoline is used to prevent and treat cerebrovascular problems and arteriosclerotic illnesses in humans. It improves the use of oxygen and glucose by brain cells by lowering vascular resistance and increasing arterial blood flow in the brain.

Other parts of the body, particularly the lungs, have similar vasoactive qualities. Unlike many other ergolines like ergotamine, Nicergoline is not linked to heart fibrosis.

Nicergoline has been used to treat cognitive diseases, emotional and behavioral issues in older persons for more than three decades in over fifty nations.

Nicergoline is an ergot alkaloid derivative that inhibits the 1A-adrenergic receptor in a strong and specific manner. In vitro, the IC50 of Nicergoline was found to be 0.2 nM.

Nicergoline's main effect is to enhance arterial blood flow by vasodilation. Nicergoline has also been shown to prevent platelet aggregation.

According to studies, Nicergoline also enhances the nerve growth factor in the aging brain.

Nicergoline is an antagonist of the serotonin 5-HT1A receptor (IC50 = 6 nM) and has an intermediate affinity for the serotonin 5-HT2 and 2-adrenergic receptors and a low relationship for the dopamine D1 and D2 and muscarinic acetylcholine M1 and M2 receptors.

Nicergoline's primary metabolites, MMDL and MDL, have little to no affinity for adrenergic, serotonin, dopamine, or cholinergic receptors.

The following situations call for the usage and benefits of Nicergoline: 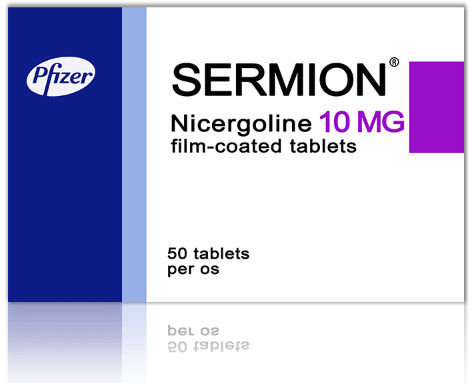 Let us see how Nicergoline works through the comments of its users.

"Nicergoline takes the prize in terms of noticeable effects on brain function, hands down. The mornings that I include 30mg of Nicergoline, I feel remarkably clearheaded as if thoughts are flowing naturally. Probably the best way to explain it is what the exact opposite of an alcohol hangover feels like, from a mental perspective. Or perhaps what it feels like after some vigorous cardio exercise when the brain feels invigorated."

"I have been using nicergoline on and off many times over the years (originally brought from Europe since us is stingy with things like that), and it is the only noot from the 100 I have tried, including your favorites, ashwagandha lions manes theanine, etc. anyway, it all works great..."

"I did push the limit on the max suggested daily dosage the other day. Took 60mg (2 x 30mg doses within 3 hours of each other). I had a little dizziness when standing up too quickly, but the effects were actually quite pleasant once I sat down and got settled in."

Nicergoline is available from some online pharmacies that carry other prescription nootropics. Just make sure that you buy from reliable vendors that sell quality genuine nootropics.

A 30mg pill would cost about $65 with shipping. You can also check Cosmic Nootropic's website for more information about Nicergoline and other nootropics.

Cosmic Nootropic is a supplier of prescription medicines, nootropics, and other substances used for research purposes.

Doses for known problems are usually 5 to 10 mg three times a day, although for anti-aging purposes, 5 mg once or twice a day may be sufficient.

For IV/IM, you should first dilute it in 250ml saline solution. It is recommended to have only 2 to 8mg per day infusion.

When taking large doses of Nicergoline with potent vasodilators such as bromocriptine, Ginkgo biloba, Picamilon, vinpocetine, or xantinol nicotinate to seek medical advice.

Nicergoline is available as a solution for injection into a vein or muscle by a healthcare professional. It is also available as a pill to be taken orally on an empty stomach.

Heartburn, gastritis, pyrosis, vomiting, diarrhea, and abdominal discomfort have all been recorded as minor gastrointestinal adverse effects of Nicergoline.

Except for the NCSG research and study, all other investigations found a similar prevalence of gastrointestinal disorders in Nicergoline and placebo-treated participants.

Significant increases in serum uric acid levels were seen; however, these patients did not require treatment.

The NCSG documented the development of gout in a previously hyperuricemic patient and instances of hyperuricemia in five patients after nicergoline therapy in 1990.

Other minor side effects of Nicergoline have been found in investigations, including hot flushes, disorientation, and interstitial nephritis.

Persons suffering from acute bleeding, myocardial infarction (heart problems), hypertension, bradycardia, or utilizing alpha or beta-receptor agonists should check with their physician before use.

Although toxicology tests have demonstrated that Nicergoline has no teratogenic effects, it should only be used during pregnancy if it is essential.

The European Medicines Agency advised limiting the use of medicines containing ergot derivatives, such as Nicergoline, on June 28, 2013.

"These medicines should no longer be used to treat several conditions involving blood circulation problems, memory and sensation problems, or to prevent migraine headaches because the risks are greater than the benefits in these indications," they wrote, citing a review of data showing an increased risk of fibrosis (the formation of excess connective tissue that can damage organs and body structures) and ergotism (ergot poisoning symptoms such as spasms).

However, only a tiny percentage of ergolines are linked to fibrosis, and data suggests that Nicergoline is not as fibrotic as other ergoline derivatives like ergotamine.

Although regulatory authorities have licensed Nicergoline for therapeutic use and thoroughly examined its efficacy and multiple modes of action, there is very little data on its safety in people with cognitive decline or impairment.

What is an Ergot Treatment?

What is Nicergoline Used for?

Despite safety concerns about Nicergoline, a review of published trials suggests that the medicine is a safe and effective alternative for the therapeutic management of dementia patients.

The medicine has not been compared to other dementia treatments, such as cholinesterase inhibitors or antioxidants, using current diagnostic categories.

Although Nicergoline has a favorable tolerability profile, the reported side effects are self-limiting and mild. Furthermore, none of the dementia treatment approaches offered a long-term solution to the problem.

Given this context, we believe it is not prudent to dismiss a novel and valuable treatment like Nicergoline solely because it is an ergot derivative.

To demonstrate the efficacy and safety of Nicergoline in dementia, including Alzheimer's disease, large and well-designed controlled studies employing modern evaluation criteria and procedures are needed.