In this NSI-189 review, we'll take an in-depth look at what this popular nootropic is. We'll also go over how  NSI-189 works in the brain, information about the benefits, side effects, and where you can buy it online.

People suffering from depression and cognitive impairment often do not receive the desired effect of their medication compared to NSI-189.

MDD or major depressive disorder is a severe medical illness that may cause mortality and functional impairment.

NSI-189 is developed as a novel drug that would facilitate its treatment to prevent this.

But what is it exactly and how does it work? Let’s dive in and find out.

In summary, NSI-189 is an experimental antidepressant that is still being studied in clinical trials. It has shown some promising effects in animal and human studies where it completed a phase I clinical trial for MDD (Major Depressive Disorder) in 2011. NSI-189 has also been shown to be effective in other neurological conditions such as: traumatic brain injury, Alzheimer's disease, post-traumatic stress disorder, stroke, and to prevent cognitive and memory decline.

If you want to get your hands on NSI-189, you can find a reputable vendor that sells it online here: 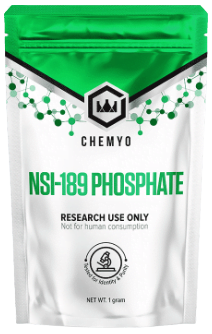 Neuralstem Inc is a biopharmaceutical company that develops NSI-189. The chemical is being investigated as an alternative drug designed for patients who failed to respond to conventional medications.

In 2011, 41 volunteers completed the phase I clinical trials [R]. Following this was the phase IB trial in 2012 and 2014, which focused on treating patients with MDD [R].

However, the phase II clinical trial was not as successful as phase I. It failed to meet the requirements for the primary effectiveness endpoint in MDD [R].

At present, NSI189 is still being tested for other conditions such as improved brain health, diabetic neuropathy, stroke, neurodegenerative disease, post-traumatic stress disorder, and Angelman syndrome. It is used to treat traumatic brain injury.

The FDA has granted NSI-189 Orphan Drug Designation as a treatment for the rare disease, Angelman syndrome.

NSI-189 increases the hippocampal volume like other antidepressants. But what sets it apart is its ability to screen for compounds responsible for the said increase among rodents.

Since there is yet a need for a human clinical trial, its ability to increase the hippocampal volume makes it a better medication for depression.

NSI-189 may promote neurogenesis in the hippocampus-derived neural stem cell and affect the parts responsible for learning, memory, and emotion. This happens along with different processes.

The drug is a benzylpiperazine-aminopyridine that may pass the blood-brain barrier.

Neurogenesis is stimulated in the hippocampal slices, specifically the left side of the human brain.

In some cases, as in after stroke, it may increase Ki67 and MAP2. It also aids in the improvement of BDNF, GDNF, and VEGF.

NSI-189 demonstrates a few more mechanisms that may prove its efficacy as a better treatment for depression.

In the brain, NSI 189 increases the hippocampal size by 20%, and it modulates aldosterone receptors by improving glucocorticoid resistance.

Other possible mechanisms include TRPV1 antagonist and norepinephrine-dopamine reuptake inhibitor with binding affinity.

A sufficient human clinical trial has to be conducted to prove the efficacy of this nootropic and its ability to treat mental disorders.

But since there is a lack of it, this NSI 189 review lays down the benefits of taking the product from the first trials.

The supplement revealed more of its effects that are favorable to humans.

NSI supplements should be taken in recommended amounts for visible results. A dose of 40 mg is typically advised for starters.

Depending on the body's reaction, it can be taken once, twice, or thrice a day for 28 days, as suggested by a clinical trial focused on the treatment of major depressive disorder and neurodegenerative disease.

If you wish to try the drug and other supplements, drugs, or existing conditions, it is best to seek medical advice to avoid adverse reactions.

Most of the clinical research on NSI 189 is on animals, and there are only very few on humans.

Nonetheless, patients' side effects are reported in small or higher doses regardless of taking it.

People who use the drug at 40 mg may still experience dry mouth, restlessness, sleepiness, headaches, dizziness, rash, hyperthermia, and palpitations.

There are no serious long-term side effects reported on animals when administered in high doses.

Even with the lack of a sufficient human clinical trial, the phosphate compound had become available in the market for human consumption.

Here is what users experience from taking NSI 189.

"I've been using it for a month in conjunction with a consistent exercising routine and vitamins. I must say that the results are amazing. I mix 40 mg in coffee or orange juice every morning. You will feel the effects within 15 minutes. At first, you will feel stimulated and motivated. The feeling is similar to Adderall but less intense and healthier...The best part about NSI-189 is that there is no withdrawal if you stop taking it at any point. Last but not least, this compound is very hard to find. I managed to find a legit vendor with authentic signed lab reports. You can check out their site ->https://science.bio/."

"Personally, I've found NSI-189 to be very useful. I'm taking 50mg freebase once daily in the morning. The acute effects for me are a gentle wave of calmness, improved long-term memory, and notably improved vision."

"So I started taking NSI-189 a little bit over a month ago, freebase, sourced from science.bio...The first day I took 40mg sublingually in the morning, to very little effect… The second and third days I did the same, with no effects. The fourth day I swallowed down 40mg with water, and noticed a slight mood boost. The fifth, and all subsequent days, I've taken between 80 and 110mg orally in the morning, sometimes on an empty stomach, sometimes not, and I feel as though I've been brought back to life."

There are instances when both freebase and phosphate are available, and users get confused about which one to get.

Here is what you should know about their difference to add some clarity.

Phosphate is the one used by Neuralstem Inc in their clinical trials. It is best taken orally and is about 15 to 20% more expensive than the other version but is much more stable and has better bioavailability.

The freebase version is used for sublingual ROA. It is the secondary amine, the nitrogen atom bonded to two carbon atoms and one hydrogen atom. It has poor bioavailability.

If you consider purchasing NSI 189, you may want to consider the mentioned factors to know whether to get the free base or the phosphate.

Where to Buy NSI-189 Phosphate Powder?

It is challenging to find NSI 189 for sale due to its scarcity. If there is availability in the market, there are still pertinent things you have to check to ensure that your chosen vendor is reliable and that what you are buying is legitimate.

Some supplements and compounds are priced very high, while some are too low. To avoid any problems with NSI-189, buy from reliable sources and check the following:

Organoleptic verification is an intensive method of identifying compounds.

This method includes observing the chemical's actual appearance and physical properties if it matches the online reports.

Often, appearance, taste, and smell are the factors to check in organoleptic verification. The chemical may be crystalline, has a faint odor and bitter taste.

NSI-189 is not very dense compared to other chemicals. 50 mg of the supplement is equivalent to a 0.15cc scoop.

This dosage is often used for the treatment of patients with cognition problems and depressive symptoms. A clinical trial may use the 40-120 mg NSI 189 dosage.

NSI-189 is eyed as a drug for the treatment of the major depressive disorder.

Even with a lack of human study, after it was evaluated, it remained a potential antidepressant medication and was even granted Orphan Drug Designation by the FDA.

Its administration also shows positive responses in the brain that may improve cognition and treat traumatic brain injury or aging.

The phase I clinical trial gave high hopes in the medical field about the significant discovery of a possible new antidepressant.

However, other crucial aspects have to be covered and tested to amplify the efficacy of NSI-189 as a new strategy for treating depression and cognition disease.