In this PRL-8-53 review, we'll take an in-depth look at this popular nootropic. We'll examine how PRL-8-53 works in the brain, its benefits, side effects, and where to buy it online.

Are you looking for a nootropic that can improve your memory and cognitive performance? If so, you may have heard of PRL-8-53.

PRL-8-53 is a synthetic nootropic compound that was first developed in the 1970s. It's said to enhance memory and cognitive function.

Let's take a closer look at this nootropic and see if it lives up to the hype.

PRL-8-53 is a nootropic research chemical compound consisting of benzoic acid and phenylmethylamine (Benzylamine). It works by increasing the neurotransmitter acetylcholine (ACh) levels in the brain. Thus, enhancing memory and cognitive function.

Studies on PRL-8-53 are limited, but one clinical trial, in particular, has shown promising results regarding memory enhancement in healthy adults. 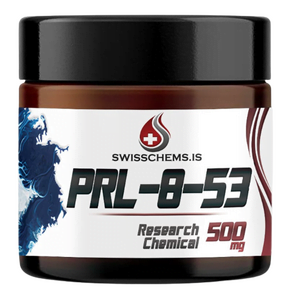 PRL-8-53, or 3-(2-benzylmethylaminoethyl) benzoic acid methyl ester hydrochloride, is a nootropic substance that was first synthesized in the 1970s by a chemist named Nikolaus Hansl at Creighton University. Since then, it has been the subject of multiple studies investigating its effects on cognitive function and memory.

It is a synthetic nootropic derived from benzoic acid and phenylethylamine [1]. Benzoic acid is found in the food we eat, such as dairy products, fruits, and plants.

As a brain supplement, PRL-8-53 improves memory, learning, and cognitive function. It is also said to increase concentration and alertness.

With better cognitive function, the mental faculties for alertness, attention, and intelligence work perform at their peak.

The precise mechanism of action for PRL-8 53 remains unknown, though it is hypothesized that the smart drug has cholinergic properties.

It has been shown to potentiate dopamine while partially inhibiting serotonin and may also reverse catatonic effects caused by reserpine.

Choline is an important nutrient for the brain. It is a precursor to the neurotransmitter acetylcholine (ACh), which is involved in memory, learning, and other cognitive processes [2].

PRL-8-53 may also increase levels of dopamine in the brain. Dopamine is a neurotransmitter that plays a role in motivation, pleasure, and reward-seeking behavior.

PRL-8-53 is used for its cognitive-enhancing effects, more precisely, its ability to improve memory and learning.

In 1978, researchers conducted a double-blind study on healthy volunteers and found that 5 mg administered orally 2 -2.5 hours before testing led to overall improvements in recollection.

The greatest effects were seen among poor performers who experienced an 87% increase or greater when compared to the placebo group (6 words or fewer).

A 128-152% increase was discovered when controlling for individuals over the age of 30. It's conceivable that this result is due to an upper-bound effect since many people in their sample scored close to 100 [3].

What Are The Benefits Of PRL-8-53 For Cognition?

According to Dr. Hansl et al., the benefits of taking PRL-8-53 can be broken down into 3 major categories:

The immediate memory improvement is thought to be due to PRL-8-53's cholinergic properties.

The long-term retention and increased learning ability may be due to PRL-8-53's ability to increase dopamine levels in the brain.

The increased learning ability may also be due to PRL-8-53's ability to affect the cholinergic system.

These benefits were seen in healthy individuals who were given a low dose of the nootropic (5 mg).

The best place to purchase PRL-8-53 is from a reputable nootropics vendor such as Swisschems.

Swisschems is a leading online supplier of nootropics and other synthetic compounds. They offer a wide range of products, including PRL-8 53, at competitive prices.

Their PRL-8-53 is sold in powder form and comes in a 500 mg bottle for only $19.99. All of their products are lab-tested and third-party verified for quality and purity.

"I started out with small doses and worked my way up to larger quantities. I definitely feel that 10mg is a great everyday dose, and it didn't seem like taking 15mg was a big improvement over the 10. However, I decided to try 20mg on Friday for my Neuroscience test and was amazed by the enhancement in recall I had."

"I've noticed increased verbal fluency with PRL myself. Paired with caffeine, it's a great study tool. But like mentioned, it has to be taken with studying and when taking the exam for recall."

"I used PRL-8-53 with Semax and some caffeine, and I memorized about 300 questions for an exam in like 3 hours. That combo was amazing for memory. I have a horrible memory, by the way. I'm not young. I drank heavy most of my life too. If you know me, memory is not my thing. I save it for those occasions."

How Do You Take PRL-8-53 For Cognitive Enhancement?

It's important to start with a lower dose and increase gradually as needed. This will help you avoid potential side effects and ensure you experience the full benefits of PRL-8-53.

The best time to take PRL-8-53 is 2 -2.5 hours before you need to be at your cognitive best. This could be before an exam, an important meeting, or any other time when you need to be sharp and on top of your game.

There is no need to cycle PRL-8-53. You can take it daily if needed, with or without food.

What Is The Recommended Dosage For PRL-8-53?

The recommended dosage for PRL-8-53 is 5 - 10 mg, taken once daily. This dosage is based on one human study showing benefits for cognition and memory in this range.

It's worth pointing out that the participants in this study were healthy individuals with no cognitive impairments. It's possible that people with more severe cognitive deficits may require a higher dose to experience benefits.

If you're new to PRL-8-53, start at the lower end of the dosage range (5 mg) and increase as needed.

According to Dr. Hansl et al., no side effects were reported in the clinical trial of PRL-8-53.

However, as with any supplement, especially those that affect the cholinergic system, it's possible to experience headaches.

If you experience any adverse effects, stop taking PRL-8-53 and consult with a doctor.

What Nootropics Are Similar To PRL-8-53?

There are a few nootropics that share similar effects with PRL-8-53. One such nootropic is Centrophenoxine. Like PRL-8-53, it's thought to increase levels of acetylcholine in the brain and benefit cognitive function and memory.

It's also been shown to improve symptoms of Alzheimer's disease and age-related cognitive decline.

Another nootropic with similar effects is Alpha-GPC. Like PRL-8-53, it's a cholinergic compound that boosts acetylcholine levels and supports cognitive function.

It's also been shown to improve symptoms of Alzheimer's disease, dementia, and age-related cognitive decline.

Finally, Huperzine A is another nootropic with similar effects to PRL-8-53. It's an acetylcholinesterase inhibitor, which prevents the breakdown of acetylcholine in the brain.

This leads to increased levels of acetylcholine, which has been shown to improve cognitive function and memory.

What Brain Supplements Can PRL-8-53 Be Stacked With?

PRL-8-53 can be stacked with various brain supplements to enhance its effects. One such supplement is NooCube. NooCube is a powerful nootropic blend that contains 13 clinically-proven ingredients that support cognitive function and memory.

If you're looking for a more targeted approach, we highly recommend stacking PRL-8-53 with racetams. Racetams are a class of cognitive enhancers that work by increasing levels of acetylcholine in the brain.

Piracetam or Aniracetam are two good options. Both have been shown to improve cognitive function and memory, and when stacked with PRL-8-53, the effects are synergistic.

Let's take a closer look at the most frequently asked questions about PRL-8-53 down below.

The half-life of PRL-8-53 is 2-4 hours. This means that it will take your body 2-4 hours to eliminate half of the nootropic from your system. Thus, PRL-8-53 will be active in your body for 4-8 hours after taking it.

PRL-8-53 makes you feel more alert and focused. It also improves your mood and reduces anxiety.

One clinical trial on PRL-8-53 showed that it's safe and well-tolerated in human subjects in the 5 mg dosage range, with no serious side effects reported.

The effects of PRL-8-53 are typically felt within an hour after taking it. How fast it kicks in depends on a few factors, including your individual physiology and dosage.

PRL-8-53 is created in the laboratory that aims to target memory and cognitive function. Despite the little research about its potential benefits, it has multiplied its supporters because of its cognitive effects.

More substantial evidence may be needed to prove that it is worthy in the nootropic community. But as long as it is unregulated with no recorded toxicity for long-term use, it will continue to be considered one of the best cognitive enhancer supplements.