P21 is one of the most effective nootropic peptides.

Available through our partner SUAWAY™

Table of Contents show
What Is P21?
How Does the P-21 Nootropic Work?
P21 Nootropic Review
P21 Dosage & Side-Effects
Where to Buy the Nootropic P21?
Frequently Asked Questions (FAQ)
What Does the P21 Peptide Do?
What Is P21 Spray?
What Is Cerebrolysin Used for?
The Origins of P-21

P21 is a new nootropic peptide that currently hasn't undergone clinical trials but has lots of research and user reports, after being sold by Ceretropic.

The ambition with the P21 nootropic drug was to "incorporate new neurons into already existing neural networks", to battle the crippling disease called Alzheimer's. Despite the ongoing and continual research behind P-21, there exist no clinical trials.

How Does the P-21 Nootropic Work?

It works by inhibiting something that inhibits neurogenesis in the dentate gyrus.

The factor that inhibits neurogenesis is called Leukaemia inhibiting factor (LIF). P021 does not bind to CNTFr.

There are a wide range of effects induced by P-21, such as increased BDNF levels, higher AMPA receptor protein levels, (Glur2 and or Glur3), and higher Phosphorylated GSK3B levels.

Higher Ki67 levels indicate higher levels of mitosis processes [R]. Mitosis is the splitting of one cell into two cells, a vital stage of neurogenesis. There was an approximate 150% increase in mitotic cells in the dentate gyrus compared to wild-type (non Alzheimer's) after 9-month treatment with P021.

Higher DCX levels indicate the maturation of neural precursor cells [R]. However, there is a sex-dependent difference in DCX, and almost every P021 study uses exclusively females.

Most use females because Tau Diseases are more aggressive in female mice [R].

There was a 100% increase in DCX cells in the dentate gyrus after 9 month treatment with P021 compared to wild type mice. 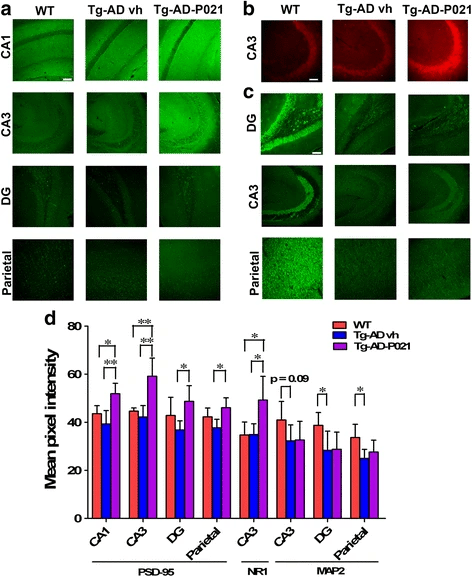 PSD-95 is used as a marker to indicate synapses. PSD stands for “Post-synaptic Density". It’s a protein that is found at synapses to signal to the surroundings that a synapse is here and the appropriate proteins and actions must be carried out. 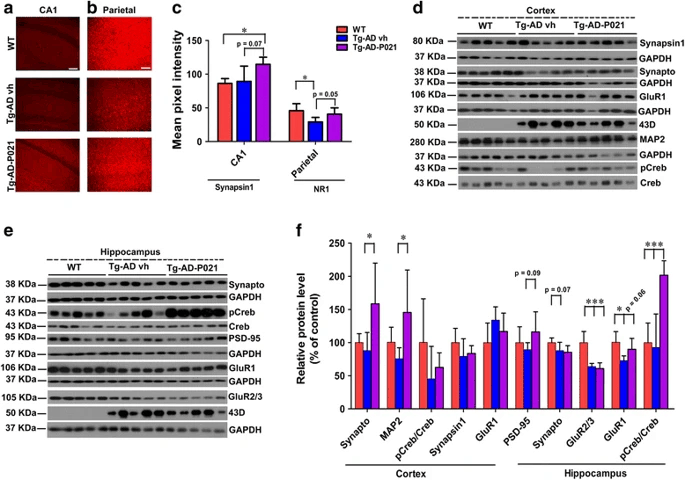 Synapsin 1 is used as a marker for the number of synapses. Synapsin actually prevents neurotransmitter release, but is a necessary part of a synapse and therefore it indicates a greater number of synapses in CA1, a hippocampal area involved in memory formation and attention. Synaptophysin is also used as a means to quantify synapses, due to their localization at synapse terminals.

NR1 is an NMDA receptor, and NMDA receptors are vital for every learning process you’ve ever performed. They are the kings of plasticity, without which nothing else happens. The brain uses NMDA receptors as if to indicate whether a synapse is worthy of improvement because if you block them, a lot of other processes don’t happen! NMDA antagonists are complicated.

MAP2 is indicative of neural skeletons. It stands for microtubule-associated protein. And microtubules are the skeleton of neurons, making them a good marker for neural presence in general, and their outward “processes” (a general term for outward arms/connections). A large boost is present in the cortex!

pCREB has a huge spike! CREB is an intermediary for a huge number of receptor triggered pathways and processes. An increase in CREB is both a promoter of and indicative of, a huge array of changes. It certainly implies neural activity and plasticity.

This is only relevant for people interested in the effect that P021 has on Alzheimer’s. FluorojadeC is thought to be a marker of neurodegeneration, and of course, Alzheimer’s diseases feature this in abundant amounts, as you can see from the blue bars!

In the dentate Gyrus, there’s a significant decrease compared to even healthy controls! 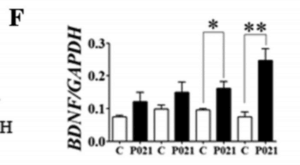 This is an in vitro analysis study of the BDNF levels in normal cells drowned in P021, for varying lengths of time. These are in normal, healthy cortical neurons, and the BDNF increase can be surprisingly high.

This research shows the results for 1, 3, 6, and 24 hours of exposure. This is why P021 needs to be taken for a long time, and consistently. 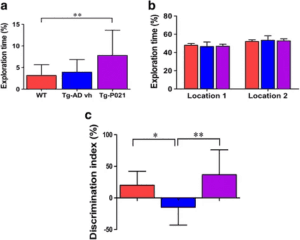 Discrimination index is used as a behavioral marker to indicate the ability for the rats to remember that they have been in an area before, in short-term spatial reference memory in the object location task. Higher exploration time is considered an indicator of a healthy, inquisitive brain which is improved in P021.

Conclusion: There are many neural activity and plasticity markers that improve after long-term P021 treatment.

What nootropics are good to combine with P21?

Ampakines may also be potentiated by P-21, as it increases AMPA receptors in multiple brain regions.

The dosage in the rat studies is varied, with some studies using the original peptide 6 11-mer at 10x the dose of other research papers. It's a bit of a mess, but we shall narrow it down and just observe P021 dosages, which still is hugely variable.

However, this was given via oral administration, which means if you are taking it intranasally, or subcutaneously, the dosage should be lower.

Numerous studies use oral administration, via incorporation of P021 into the feed of the rats, meaning their dosage depended on the amount they ate! How inaccurate!

The weight also wasn't recorded. This link shows the weight of the corresponding rats and shows that females at 3 months should weigh approximately 20 grams. Meaning, multiply by 50 for the per/kg amount, divide by 6.3 that's the human per kg dose. Nearly 50 mg oral!

"P021 is able to cross the blood-brain barrier to exert its neurogenic/neurotrophic activities, has a plasma half-life of >3 h, is 100% stable in intestinal fluid during 2 h, 90 and >90% stable in gastric juice during 30 min"

P21 is a very short peptide, and 3 mg is highly potent considering this fact.

Experiencing tiredness: Neurogenic compounds do have a tendency to produce these side effects.

Potential cognitive rebound? Fewer reports include this experiencing this side effect. It was after a short duration of use, so there are questions surrounding how this could happen (this wouldn't be to do with antibodies I assure you). Perhaps they are experiencing an increase in LIF? In which case... take more?

Where to Buy the Nootropic P21?

The real P-21 is available right here on WholisticResearch where you're reading this.

Previous vendors of P-21 were found to be selling a misinterpretation of P-21.

Analyzing their COA, someone noticed that their Molecule weight corresponds to DGGL-Alanine-Glycine instead of Adamantane-Glycine.

However, it is important to understand that Glycine does not feature in the final structure.

It was a misinterpretation of an abbreviation of a complex, VERY expensive and effective peptide modification called Adamantane. It's the most simple diamondoid.

We encrust our peptides with diamonds.

They had this COA of their products up for years and nobody seemed to notice. This was made known to one vendor and their response was claiming that Ceretropic sold this "altered-version" of P021, that was, purported to be, just as effective as the diamond-encrusted, legitimate, tetrapeptide (4 amino acids, not the misinterpretation making it 6 amino acids).

Randomly adding two amino acids to a peptide will most certainly deduct efficacy (However Proline-Glycine-Proline is clearly a different matter). It's a shame that vendors didn't sell 6C instead, which is cheaper and more effective than the Alanine-glycine mistake.

The moral of the story: Read.

What Does the P21 Peptide Do?

I am not a doctor and this should not be taken as medical advice.

The P21 nasal spray is a nootropic formulation designed to be used intranasally, to utilize the "highway to the brain" that is also known as intranasal administration. The nose is a harsh environment for bacteria and proteins and peptides alike. P-21 nasal spray according to research, however, is very suitable due to the adamantane moiety that blocks the activity of carboxy-petidases.

What Is Cerebrolysin Used for?

Cerebrolysin is one of the more well known nootropics used for brain repair needed due to ischemia, stroke, dementia, Alzheimer's, TBI, and plenty more and is even used by healthy people for cognitive enhancement. The latter purposes are not what it was primarily intended for, and the greatest gains would be seen in pathological states. But the same applies to P21.

Cerebrolysin has a fantastic track record of general brain repair in so many different disorders. It's quite popular in Russia and, like many Russian nootropics, has good reasoning and proven efficacy to support its clinical efficacy. Cerebrolysin being used for nootropic purposes has less evidence found in research but still is commonly effective.

The only concern might be that if you're hugely healthy already the amino acids won't make all that much difference, and the trophic factors only are lightly supplemental to the already high neurotrophic factor levels obtained from all those flavonoids you're eating and exercise you're doing 😉

Cerebrolysin was analyzed and found to cause neurogenesis. The multitude of growth factors found in it was compared in their ability to create new neurons. GDNF came second to CNTF.

CNTF was picked for further investigation. CNTF antibody epitope (structure) mapping led to multiple smaller sized peptides. Two peptides, peptide 5 and peptide 6 were found to be hugely beneficial to neurogenesis. Peptide 5 however, despite being around 5x more neurogenic than peptide 6, didn't differentiate the baby neurons (neural precursor cells). This is a problem as having lots of undifferentiated neurons can cause an "ectopic birth" which meddles with network behavior, negatively!

Further investigation into the structure-activity-relationship of peptide 6 narrowed the sequence from 11 amino acids to 4 amino acids. This made it (according to dosage) 10 times less potent, and named this shorter version peptide 6C. They decided to modify it with adamantane! And the rest is biohacking history.

As we can see, there is a big difference between the nootropics Cerebrolysin and P21 and, unfortunately, the two are thought to be far more similiar in action than they actually are. This is because CNTF and 6C/P21 have very different abilities. 6C/P21 only inhibits LIF, whilst CNTF does a lot of functions and so does all the other trophic factors and amino acids present in Cerebrolysin!

If you're healthy, P21 is much more likely to be nootropic, especially if you're planning to use it long term.