In this Unifiram review, we'll take an in-depth look at this popular nootropic. We'll also go over how Unifiram works in the brain, information about the benefits, side effects, and where you can buy it online.

Unifiram, also known as DM-232, is an experimental drug currently being studied for its potential antiamnesic and other nootropic effects.

While much of the research surrounding it has been conducted on animals, Unifiram has already shown far greater potency than Piracetam – a widely used cognitive enhancer.

Let's take a deep dive into the research on Unifiram and find out how it works and what Science says.

Unifiram is a potent nootropic compound that has been demonstrated to be even more effective than Piracetam, based on animal studies. It increases acetylcholine levels (ACh) and works by modulating AMPA receptors in the brain - which may explain its ability to enhance memory.

Research into Unifiram continues as it could unlock unprecedented cognitive potential for humans. 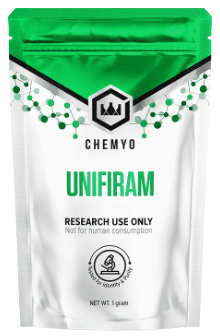 Unifiram (DM-232) is an experimental nootropic drug, whose main purpose is to improve memory and cognitive function. It has been shown in animal studies to be significantly more potent than Piracetam for these effects.

Unifiram is a racemic mixture composed of two enantiomers, with the dextro form being the more active isomer. It also has been demonstrated to reduce the duration of pentobarbital-induced hypnosis without negatively affecting motor coordination [1].

As of now, there have not yet been any formal human studies conducted on Unifiram's effects or potential toxicity. Despite this lack of data, it is still commonly sold online with no patent protecting it.

While there are other compounds related to Unifiram, such as Sunfiram (DM-235) and Sapunifiram (MN-19), these have not undergone formal testing either.

Therefore, it is important for people to exercise caution when taking Unifiram or similar smart drugs, as their long-term safety profiles remain unknown at this time.

How Does Unifiram Work In The Brain?

Unifiram is thought to work in the brain to improve memory and cognitive functioning. This is accomplished through indirect or downstream activation of the AMPA receptors [2].

However, Unifiram does not directly interact with these receptors. Instead, Unifiram inhibits certain enzymes that prevent AMPA receptor activation, allowing for greater activation of these receptors and improved cognitive response, according to Romanelli, M N et al.

The Passive Avoidance Test is a popularly fear-aggravated test used for measuring learning and memory in rodent models of CNS (Central Nervous System) disorders. It allows researchers to assess how animals interact with and respond to different environments.

In their study, Unifiram showed an increase in the amplitude of fEPSP (Field Excitatory Postsynaptic Potentials) in rat hippocampal slices. This suggests that it can strengthen connections between neurons and facilitate communication within the brain.

What Is Unifiram Used For?

Unifiram is not an approved drug and has no formal clinical indications. However, it is commonly sold online as a research chemical or general cognition enhancer with supposedly non-significant side effects.

Based on its purported effectiveness in animal models, many biohackers take Unifiram to improve memory and cognitive performance. Unifiram has greater potency than other cognitive enhancers, like Piracetam, and provides a more potent enhancement through its stimulation of AMPA receptors.

AMPA receptors mediate the pro-cognitive effects of glutamate [4], which is the major excitatory neurotransmitter in the mammalian brain; thus, stimulating these receptors leads to improved memory and learning.

What Are The Benefits Of Unifiram For Cognition?

Unifiram is reported to have several nootropic benefits for cognition, such as:

According to numerous anecdotal reports, consumption of Unifiram improves focus, memory, learning, mental vigor, and fundamental cognition. These are the same results as well-known racetams like Piracetam and Aniracetam. The difference is that Unifiram appears to be far more effective, producing greater effects at lower doses.

As a result, your ability to process information more quickly and clearly improves. That is why it is popular for anti-amnesiac effects such as increased attention span and mental clarity.

Where To Buy Unifiram Online?

If you're looking for a potent nootropic like Unifiram to help with your cognition, you can purchase it online from various vendors. We highly recommend Chemyo, an American-based company that sells Unifiram alongside other nootropics and supplements.

Shopping for high-quality nootropics can be difficult, but Chemyo makes it easier - they're third-party verified and feature airtight and waterproof packaging. You'll get the best bang for your buck with their Unifiram prices starting at only $29.99 (USD) for 1 gram.

It's worth noting that Unifiram is also commonly sold on nootropic forums and other grey-market websites, so you may want to be cautious when buying from unverified sources. Make sure the product comes with clear lab testing results and third-party verification before you consider purchasing.

If you want the highest quality and most potent Unifiram, you can find it right here:

Let's look at what some people are saying about Unifiram on Reddit:

“The most noticeable effect I noticed (and that others have reported) is reduction of fatigue, particularly while sleep-deprived--not in a stimulating way, just a reduced need for sleep and a feeling of wakefulness. It also seems to give a good boost to logical and mathematical reasoning similar to (but possibly better than) sunifiram…”

“My experiences with unifiram have been quite astounding. It's a subtly stimulating compound that, unlike sunifiram, is not pushy in any way. I've been using 30 mg twice daily, and I find it to be incredibly helpful in overall motivation and cognitive clearness.”

“I've been taking unifiram for a little over a week, and it's a very nice, subtle & clean high. The first time I took it, my body felt empty & weightless, as if all my muscles had the feeling of being "flat". I also felt almost clinically lucid, in the sense that I could think clearly & quickly. My sleeping patterns have changed a bit as well, and now I fall asleep easily and stay asleep until early morning without any nootropic...”

As you can see, many people have positive experiences with Unifiram and report significant improvements in cognition and the ability to focus, think clearly, and stay motivated.

How Do You Take Unifiram For Cognitive Enhancement?

We highly recommend splitting up your daily dose of Unifiram into 2 or 3 smaller doses taken throughout the day. This will help you avoid any potential side effects while still allowing the effects to last throughout your waking hours.

As a general rule, we recommend starting with a lower dose and working your way up slowly, depending on how you feel and respond to it. Most users find that taking Unifiram on an empty stomach first thing in the morning and then again at noon produces optimal results.

Biohacking enthusiasts often cycle their Unifiram intake to prevent tolerance build-up, but this isn't mandatory. In fact, the most powerful effects of taking Unifiram are experienced after maintaining use over several weeks. Daily use of Unifiram is recommended for at least 3 to 4 weeks for long-term benefits.

That said, it's always best to consult with your doctor before starting any new supplement, especially if you have a pre-existing medical condition or are taking any prescription medications.

What Is The Recommended Dosage For Unifiram?

There is no official Unifiram dosage guideline because the drug is unregulated, and there are no human studies. Anecdotal reports suggest that a 5-10 milligram (mg) dose is sufficient to provide powerful results due to the supplement's strength. Many users also recommend not exceeding 30 mg in a day.

It's also important to note that Unifiram has a relatively short half-life, so it may be best to break the daily dosing into smaller amounts taken throughout the day. This can help you avoid any potential side effects and get the most out of your cognitive enhancement benefits.

If you're looking for a great starting dose, we recommend starting with 5 mg daily and slowly working your way up.

What Are The Side Effects Of Unifiram?

Unifiram is an experimental smart drug with limited research and few reported side effects. In general, people who take it in small doses report feeling alert and focused but no other major benefits or side effects.

However, higher doses have been associated with significant irritation, anxiety, and negative effects that may last for several days. Those who attempt to enhance Unifiram's effects by stacking it with stimulants such as alcohol or caffeine may experience unpleasant side effects due to the interaction of these substances.

Furthermore, researchers have not conducted any human trials on the potential drug interactions of this nootropic, so it is impossible to predict how Unifiram will react with specific medications.

As a result, those taking prescription medication should avoid this supplement without consulting a doctor.

What Nootropics Are Similar To Unifiram?

There are 3 main nootropics that are similar to Unifiram. They all work by affecting specific neurotransmitters in the brain, which regulate brain function.

These nootropics include Sunifiram, Piracetam, and Nefiracetam. Each one has unique properties and affects users differently.

Piracetam is the only nootropic on this list that has been extensively researched, as it is the most widely used and best-understood nootropic.

What Brain Supplements Can Unifiram Be Stacked With?

According to our market research, the 3 best nootropics to stack with Unifiram are Noopept, Piracetam, and NooCube.

Whether you need to maintain productivity for long study sessions or simply get through your busy day at work, NooCube can help with brain performance and clarity.

When NooCube is stacked with Unifiram, users can expect to experience increased memory recall, greater focus and concentration, more energy, and a greater ability to retain new information.

Let's take a look at some of the most common questions people have about Unifiram and its effects on brain function:

How Long Does It Take For Unifiram To Work?

Unifiram kicks in fast, and its effects can be felt within 1 hour of taking it. People who take it on an empty stomach tend to feel its effects more quickly than those who take it with food.

How Does Unifiram Make You Feel?

What's The Half-Life Of Unifiram?

The half-life of Unifiram is 3-5 hours, meaning it takes the body around 3-5 hours to metabolize and process half of the Unifiram that was initially ingested.

Is It Safe To Use Unifiram?

There is limited data available on the safety profile of Unifiram, as it has only been studied in animals. Most users, however, report experiencing few to no side effects with Unifiram.

Unifiram can be legally purchased in the United States. However, because the drug is unregulated, it falls under the category of "research chemicals." Users who live in other countries may be subject to different regulations.

Does Unifiram Have Any Drug Interactions?

When stacked with stimulants such as caffeine, or an amphetamine, like Adderall, Unifiram may cause an increase in heart rate and blood pressure. People who are taking prescription medication for any existing medical conditions, such as anxiety or depression, should speak to a doctor before starting to use Unifiram.

So what do we know about Unifiram?

Unifiram is an experimental nootropic drug with antiamnesic and other powerful effects that surpass Piracetam. Unifiram's effects are thought to be induced by the AMPA receptor antagonist NBQX and by modulation of the GABA and AMPA receptors.

Anecdotally, Unifiram is being used for its ability to enhance focus, concentration, and energy levels. Unifiram also appears to improve users' memory recall and learning ability, making it a popular choice among students and other cognitively-demanding professionals.

It stacks well with other nootropics such as NooCube, Piracetam, and Noopept, offering synergistic effects that help users achieve their cognitive goals.