We compared two medications classified as effective in the use of treating sleep disorders and growing in popularity for their nootropic effects. But which is better? Armodafinil vs Modafinil.

Armodafinil and Modafinil are prescription medications. They are both wakefulness-promoting substances that are commonly used for treating sleep disorders such as narcolepsy and sleep apnea. They work to boost energy and reduce tiredness.

However, they are growing in popularity as effective nootropics as a result of their cognitive enhancement effects and benefits of improving cognitive function and performance. Studies have shown their ability to improve memory, focus, and overall cognitive performance.

Between their therapeutic effects and their nootropic qualities, it can be difficult to establish which is better. We’ll be reviewing and comparing which medication is better.

Table of Contents show
What is Armodafinil?
What is Modafinil?
Differences Between Armodafinil and Modafinil
Similarities
Which is Better?
Experiences on Reddit
Where to Buy Armodafinil & Modafinil
Frequently Asked Questions (FAQ)
Conclusion

DISCLAIMER
The product(s) mentioned in this article may or may not require a valid prescription where you're located. It's your responsibility to research your local laws and regulations and only use one of the mentioned external online stores if you can legally buy and possess the product(s). None of the information contained in this article shall be interpreted as legal advice.

Armodafinil is a pharmaceutical drug that’s used in the treatment of sleep disorders such as narcolepsy. The drug aims to improve wakefulness. It does this by interacting with the wake sleep cycle and circadian rhythms in the body. These systems work to establish when we sleep and wake which determines the quality of our sleep and health. 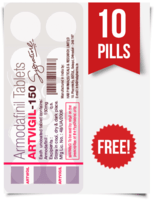 Armodafinil can be taken orally as a tablet. Typically it is taken once daily. Used in the treatment of narcolepsy, it is often advised that it be taken in the morning and should be taken at the same time every day and can be taken with or without food.

As with all prescription medication, there is a risk of side effects. Common side effects associated with taking Armodafinil include experiencing:

Whilst experiencing side effects from this drug is considered rare, the possibility is there. More serious side effects associated with Armodafinil include experiencing an irregular heartbeat, depression, or an allergic reaction.

Armodafinil possesses a risk of habit-forming. Though established as having a low possibility of becoming an addictive substance, the misuse of the drug is possible. If you experience any of the symptoms presented be sure to consult a doctor and seek advice.

Modafinil is a pharmaceutical drug that is also used to treat sleep disorders such as narcolepsy. It’s characterized as a class of prescribed medication that it contains promotes wakefulness. It does this by altering the number of natural substances present in areas of the brain that control sleep and wakefulness.

It works by activating a part of the brain called the hypothalamus which is the area that controls patterns of sleep and wakefulness. This results in increased wakefulness as well as improved attention and improved memory and fluid intelligence. 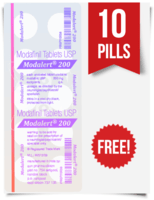 The usual dosage of Modafinil for the treatment of narcolepsy for an adult is 200 mg to be taken daily. However, in comparison to Armodafinil, the recommended dosage may vary depending on the individuals’ condition. Hence, it’s advised that anyone using Modafinil takes the prescribed dosage.

More severe side effects include experiencing an allergic reaction, hallucinations, chest pain, and breathing difficulty. If you begin to experience any of the symptoms presented be sure to get emergency medical help and consult your doctor.

Differences Between Armodafinil and Modafinil

Enantiomers are characterized as molecules that mirror one another. Hence, they have different chemical structures but they work toward the same goal. As a newer drug, Armodafinil is slightly more improved and is considered to be a more effective drug in producing wakefulness effects.

The same study showed that concentrations of Armodafinil were higher later in the day which produced more effective results for longer.

Both Armodafinil and Modafinil are used in the treatment of sleep disorders. They are most commonly used for the treatment of narcolepsy, shift work disorder, and obstructive sleep apnea. They work to increase wakefulness. With similar goals, prescription medication presents several similarities.

Both medications are classified as IV drugs which are characterized as having a low risk for abuse and dependence. As non-narcotic substances, the risk of developing an addiction is low. The risk is also lowered by the fact that they are controlled substances that are only available under prescription.

Both Armodafinil and Modafinil were designed for the use of treating sleep disorders. Hence, it’s no surprise that they share some similarities. One of the most significant similarities is that they possess the same pharmacological mechanisms of action that aim to promote wakefulness. Both achieve a wakefulness effect in similar ways by interacting with the central nervous system. They each work to inhibit dopamine reuptake by binding the dopamine transporter to increase the level of dopamine in the brain.

Both Armodafinil and Modafinil are effective in their treatment of sleep disorders. Studies show that each significantly reduced excessive sleepiness, improved quality of sleep and wakefulness. Both are established as being equally effective, efficient, and safe.

Both Armodafinil and Modafinil are approved for safety by the FDA for the treatment of sleep disorders. Whilst like any prescription medication, they have a risk of side effects, they are generally considered safe when they are used following the instructions and taking the recommended dose.

Special precautions should be taken for anyone who;

If any of the above apply to you, be sure to consult with your doctor before beginning any new course of treatment.

There are few differences between Armodafinil and Modafinil as both work in similar ways and produce similar effects. They are both classified as effective prescription medications when it comes to treating sleep disorders such as narcolepsy, shift work sleep disorder, and sleep apnea.

However, Armodafinil is a newer medication that derives from Modafinil and could be said to be a more successful medication for producing wakefulness effects. As a newer drug, it provides enhanced effects that prove to be more effective than Modafinil.

Modafinil works by acting quickly in a shorter time. Its rapid effect is shown to hit people harder and they receive its full effect all at once. This effect has also been shown to increase the risk of experiencing withdrawal symptoms which increases the risk of tolerance and dependence.

In contrast, Armodafinil works by taking longer to produce an effect. It also produces a longer-lasting effect that people have reported feels clearer and not so pronounced. The result is not only a subtle but significant effect, it has also been shown to increase in effectiveness throughout the day to improve wakefulness. In doing so, it also improves cognitive functioning by providing prolonged cognitive enhancement effects and benefits.

Take a look at some of the feedback from real people on Reddit after using Panax ginseng:

“Modafinil keeps me going for the day. Energy-wise that is, in the sense that you don’t really feel tired.”

Where to Buy Armodafinil & Modafinil

Armodafinil and Modafinil can be brought from online vendors for the use of treating sleep disorders. However, it’s important that if you’re thinking about sourcing these medications online, that you do so from a trusted vendor. The two medications contain strong active ingredients that can have adverse effects if taken incorrectly.

Hence, it’s important that the vendor supplying the medication is authentic, certified, and reliable. Be sure to always look at the reviews and feedback to gain more transparency. A reliable vendor that supplies these medications is ModafinilXL.

Can You Take Armodafinil and Modafinil Together?

It is not advised that Armodafinil and Modafinil be taken together. As both contain similar active ingredients and produce similar effects, taking them together could produce adverse and dangerous effects.

Taking Armodafinil and Modafinil together could result in experiencing withdrawal symptoms, overdose, or fatality if taken in large amounts. To find out more information on which medication is best for you, be sure to consult your healthcare practitioner for advice.

What Happens If I Miss a Dose?

If you miss a dose of your prescription, be sure to consult your doctor. Avoid taking extra medication to make up for a missed dose, as this can increase the risk of tolerance and dependence.

How Long Do Armodafinil and Modafinil Last?

The half-life of Modafinil ranges from 10 to 12 hours. It produces prolonged wakefulness effects making it an effective treatment for sleep disorders. However, it is quick to absorb, sometimes causing an initial rush known as a ‘Modafinil high.’ Taken on an empty stomach, Modafinil can take up to 30 minutes to take effect.

Armodafinil has a longer half-life than Modafinil. As a result, although it takes longer for it to take effect, its effects last for up to 15 hours. This is significantly longer than Modafinil. Along with providing wakefulness effects for a long period of time, it also provides prolonged cognitive stimulation for enhanced cognitive performance. Taken on an empty stomach, Armodafinil takes about 2 hours to take effect.

Armodafinil and Modafinil are essentially very similar medications. They are similar in matters of their effectiveness in treating sleep disorders and their safety. They are also similar in their makeup and the side effects that they may cause. The most significant difference is how long their effects last and their potency.

Though Modafinil is considered to be stronger, its rapid absorption can cause uncomfortable effects whilst Armodafinil acts as a modified version of Modafinil that produces equally effective treatment results but with a subtle effect. Additionally, studies have shown how Armodafinil’s effects last longer and become more concentrated throughout the day to produce more significant effects.

However, some may argue that when it comes to the two medications being used as nootropics for cognitive enhancement, which is better is subjective. This ideal comes as a result of different people experiencing the medications in different ways. However, Armodafinil has been shown to produce a longer boost of cognitive-enhancing effects. Similarly, reviews show that Modafinil is a more trusted medication as it has been around for longer.